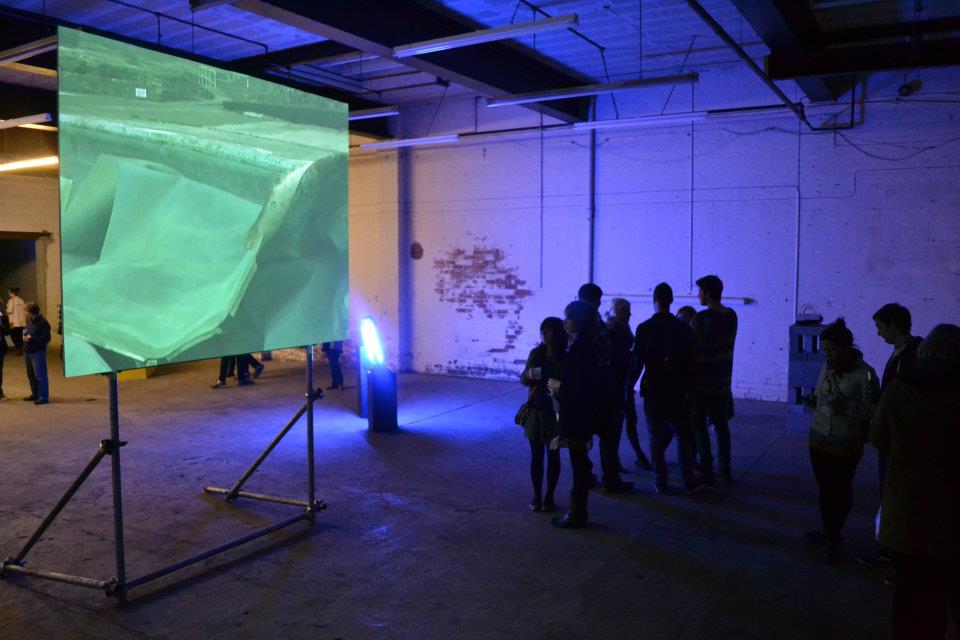 Daniel Sean Kelly is an artist based in Leicester and co-director of Two Queens, an artist-run gallery and studios located in the city. With the ambition of providing a centre for experimental modes of arts production, exhibition and exchange, Two Queens is dedicated to establishing an agenda for new activity in the city and across the region. You can follow Daniel on Twitter and Instagram and Two Queens on Instagram.

1. What’s happening behind the scenes at the moment at Two Queens?
Our current show opened a few weeks ago and runs through the summer so we are basking in the unusually warm studios and also the satisfaction that comes from a successfully installed and opened show! We’re also working on a funding bid for a future project and starting to firm up plans for the next two exhibitions.
2. Who are the artists that you’re working with at the moment?
Our current show is by an artist duo based in London called Hannah Quinlan and Rosie Hastings, their work centers on themes of queerness and resistance, and includes an on-going project @Gaybar, where the artists re-stage the historicized gay bar as a container for queer practice, and the UK Gay Bar Directory, a moving image archive of gay bars in the UK. Their work in the past has included film works and installations, as well as a really nice series of drawings on paper they have been working on over the last year.
3. Tell us about your current exhibition or upcoming exhibition.
Rosie and Hannah’s show is open now and runs until the 1st of September – its called ‘Something for the Boys’ and is the first showing of a new 15 minute video work, which has been a step forward in their work in terms of the production values and ambition of the work. For this project they have worked alongside performers and film-makers to make something which is kind of a consolidation of some of their more research-led works over the last few years like the Gay Bar directory which is an ongoing project that seeks to catalogue Gay Bars and Nightclubs as they close due to rising rents and gentrification.
The film was made in Blackpool and focuses on the ways that the town is a sort of focal point for the larger political conflicts of our time that become exaggerated through the lense of the hyper-patriotic faded seaside town. It also seeks to portray a more nuanced view of Gay identities that exist in conflict with each other but which are often subsumed into a more homogenised mainstream portrayal of the LGBTQ community. The film switches between two performers who depict these disparate identities, between the optimistic but socially conservative world of musical theatre and cabaret, and the darker, more dystopian leather scene that both have complex aesthetic cultures.
4. How do you select the artists you work with?
Over the last few years Two Queens has found a niche of acting as a kind of bridge organisation between smaller more temporary artist-run organisations and more institutional spaces, which I think has sort of happened naturally as we look back on six years of experience putting on shows, yet seek to remain independent and small-scale organisationally. A lot of the artists we work with go on to show the work again at bigger spaces or develop new relationships off the back of shows at Two Queens, and that’s something we’re really proud of. The new programme (of which Hannah and Rosie’s show is the first exhibition) seeks to formalise this way of working, to seek out and champion artists who have shown a commitment to their practice and are making really interesting work, but maybe only really shown in smaller spaces or group shows, or mainly in one city or region, and not really had the chance to throw themselves into an ambitious project. So our process of selection at the moment is focused on artists who kind of fit that profile – those who we think have the potential to build a more visible practice.
In terms of how we find artists to work with its very varied but mostly happens informally, through keeping an eye on the programmes of other galleries we respect. Sometimes we build relationships with artists over a number of years from seeing their degree or MA shows that eventually leads to them showing at Two Queens years later – a visible persistence and dedication to their practice is one of the most important things, as well as having a voice or perspective that we don’t see as much of, and making well thought-through, considered work.
5. What dates should we put in our calendars?
We are planning to round off the current exhibition with a special screening event around the final week of the show, so keep your eyes peeled for more information! Also we will have our summer school taking place during August which will be ending with a short exhibition at the end of the month.
6. What or who are you really excited about?
We’re really excited to work with three more great artists during this exhibition programme which runs up until Autumn 2019. We’re not quite ready to announce any more names yet but we’ve got some really great artists lined up who I think will produce very exciting new work here in Leicester.
7. What do we need to see more of in the East Midlands?
More artist-run spaces would be nice, or just generally artists taking the initiative to create the kind of spaces or programmes they want to see in their home city – spaces that also look outwards into the wider region/country/the world! I think maybe the East Midlands isn’t particularly prominent nationally in terms of visual art, and an ambition could be to find more ways to join up what is already happening to have a stronger regional identity that in turn encourages more new projects to start here.
Daniel was interviewed in August 2018.
For more information visit Two Queens’ website.
Share This Post
Via Facebook, Twitter or Email
← Meet the Artist: Alexis Rago
Newsletter 6th August – 9th September 2018 →