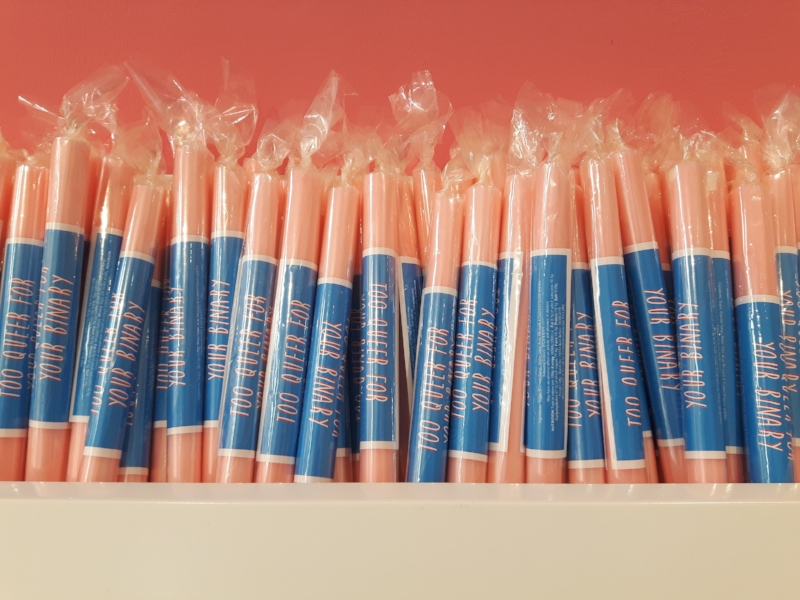 Dylan Fox is a Northamptonshire based artist, whose work unpacks the various barriers the transgender community faces. With an emphasis on social interaction, combined with the visual language most associated with printed matter and found objects, Fox’s work has been exhibited nationally; highlights include solo shows at NN Contemporary Art, Northampton, Contains Art, Watchet, and taking part in this year’s Coventry Biennial. He has work in a number of public and private collections in the UK.

I’m based in Northamptonshire.

My practice unpacks the various barriers the transgender community faces. More specifically I have been exploring the injustice of inefficient healthcare pathways in the UK, bias in media representation and by extension, wider societal views. I utilise found objects and printed matter to create works designed to replicate the feelings of frustration felt through my own gender transition. Developing scenarios where the public endure a similar experience of ambivalence, these scenarios often have a participatory element, aiming to shift public perceptions through dialogue.

I have developed my practice over the last five years, starting on my undergraduate degree in Fine Art, and progressing as a practicing artist through solo and group shows since then. My practice really developed from the frustration I feel through transition, especially during the early days. It’s a culmination of my research into socially engaged art practices, theories of open form, and queer histories combined with my personal experiences.

Your work explores the physical, medical, emotional and social aspects of gender transition. What do you think an arts practice brings to this subject?

Primarily, my practice allows me to explore these various aspects of my own gender transition within a public domain. It has allowed me to share some of the experiences I have had, within a relatively safe and accepting space, but also within an ‘art world’ that is constantly questioning. This has helped me to explore my transition on a personal level as well as publicly too.

What does having a “largely dialogical and participatory’ practice enable you to achieve through your work?

I think this builds on the previous question, having a practice that is in the public domain, that seeks to engage and converse with the public helps make the subject matter accessible on multiple levels. Working in this way means my work, and the topic of gender transition, can be engaged with by a wide range of people, some of whom would not normally engage with contemporary art or gender politics but choose to engage with works like Candyfloss, 2017, and Claw Machine, 2018.

Often your work is realised through familiar forms and features: deck chairs, swimming towels, neon signs, beer mats. Do you think this familiarity makes it easier for audiences to consider the issues you address in your work?

I think these objects, some of which are so familiar, makes the work easier to engage with on a simple level at first. Anyone can sit in a deck chair or pick up a beer mat, and engage with these things as objects. Its up to the individual to then engage further if they are interested in the work, to then learn more if they wish.

Because of the way I work, conversations occur naturally during the process of conception, design, installation and delivery of participatory works, and these conversations feed back in to my practice. They are an important part of my working process, alongside research and note taking in my sketchbooks.

I am also monitoring media outlets, its often hard to read, but it’s important to stay on track for me as a lot of this frustration and misrepresentation feeds into my practice directly; this generates new ideas and new work. I must say some content from the media is becoming increasingly transphobic so I do have to take a break from this occasionally as it does become a little overwhelming at times.

I am currently taking part in Coventry Biennial, where I have 4 works across 3 venues. This achievement, only 3 years since I graduated art school, feels huge to me. I’m extremely grateful for the opportunity, and the contacts that were made by Catherine Hemelryk, and CVAN EM, during my solo show at NN Contemporary last year.

I think it’s important for artists to be open about the fact that we all need a basic income. It’s vital to continue maintaining a practice. So full time work, money, and rest, and not taking on too much at once. Having a balance between your art practice, art career and life – which can be really challenging!

A few months ago I visited the Keith Haring exhibition at Tate Liverpool, and it was a good show, but the thing that inspired me the most was visiting The Royal Standard – an artist-led studio complex and exhibition space in Liverpool. I joined in on a group crit with some of the studio holders, shared a few beers, and chatted. There’s an openness and honesty further up north that we could really learn from.

There are some obvious names to drop – Allan Kaprow, Wolfgang Tillmans, Joseph Beuys, Andy Warhol, Felix Gonzalez-Torres, Gran Fury, Bas Yan Ader. There are also artists working now who are making really important, topical work – Liv Wynter, Travis Alabanza, Dominic Allan, Malik Nashad Sharpe, Olive Sanderson, Christopher Daubney. It’s nearly impossible to say why for each artist, as I am influenced and inspired by a wide range of practices, often it’s one or two works that really stand out, that resonate in a way that motivates me to generate work myself.

Where do you see your work in the next five years?

I would love to be involved in more group shows. I think my work has the potential to engage with a wider range of queer arts practice through group shows that I currently haven’t been able to achieve through solo shows.

I have a back catalogue of undeveloped ideas waiting for the right moment, the right political climate or the right space, so I’m sure something will come along that makes these ideas make sense, for that time and that space.

I don’t currently hold a studio, I’m working more from home and also taking a little time out as I have some surgery coming up soon. That said, I would like to invite Liv Winter, I think they would just be a chill person to chat with; maybe go to the pub and grab a beer while making a plan for tearing up the establishment, smashing gender binaries and bringing down the TERFs (Trans Exclusionary Radical Feminists).

Dylan was interviewed in November 2019.