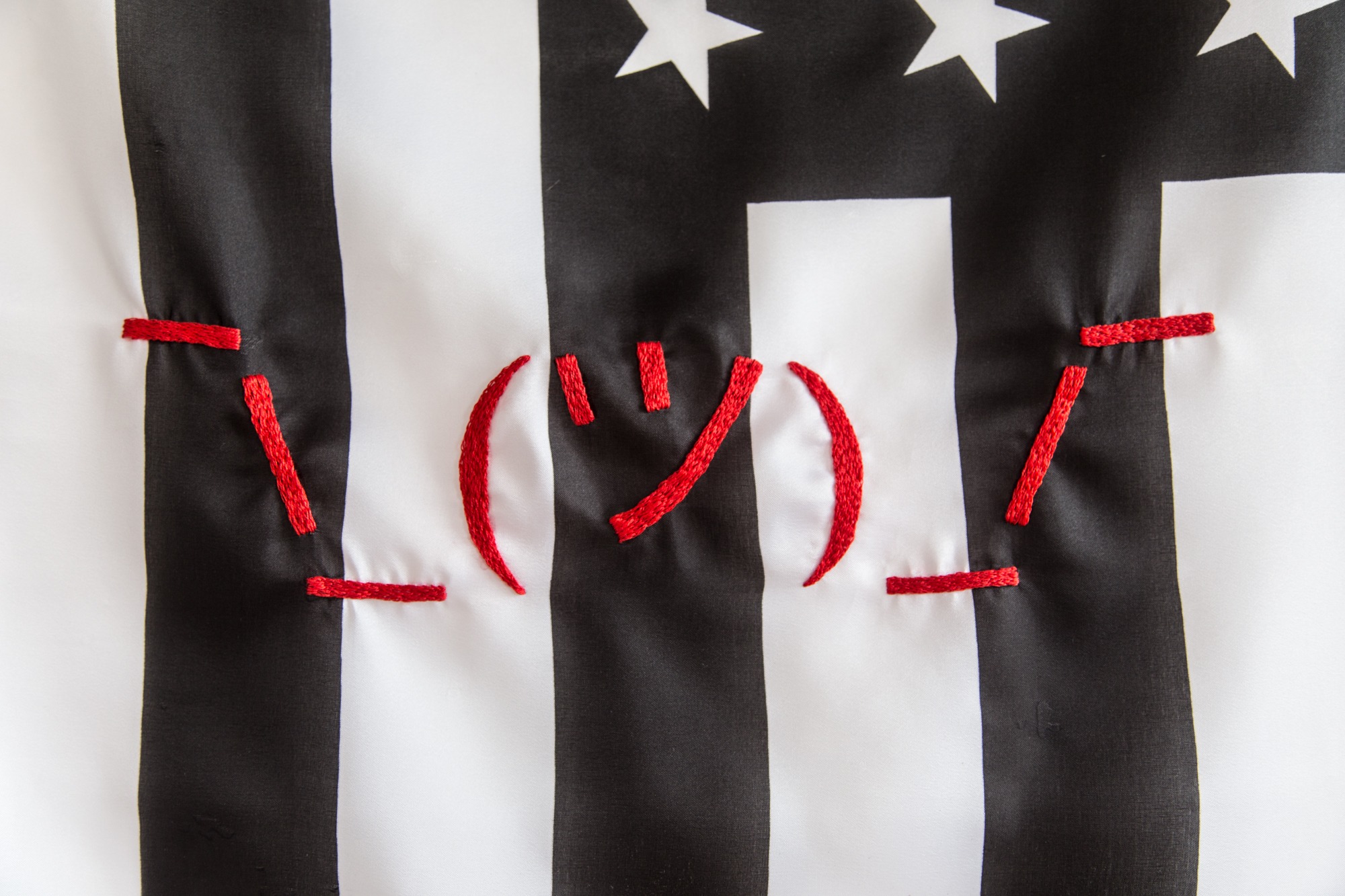 Jessica Harby is based in Northampton. She grew up in Chicago where she attended the School of the Art Institute of Chicago. She moved to the middle of England to be with her husband with whom she shares a studio called Cap’n Irony’s Art Shak. Her work explores the malleability of the self. It draws on a feeling of foreignness, the idea of young women being treated as vessels for ideas, and the social construct of villainy.

I am completely focused on creating a visual that is amusing and unsettling simultaneously. I explore the malleability of self through themes of foreignness, femininity in all its celebrated and attacked forms, and the social construct of villainy. Most of my work is paper- or fabric-based, though I’ve been playing with digital media this year.

I balance all the time I spend on my own in the studio by working with amazing people via collaborations and programmes for creative teens and young adults.

I’ve been practising three years professionally. I emigrated to England at the end of 2008, less than two weeks after finishing my degree at The School of the Art Institute of Chicago, jettisoning most of my art supplies and losing a large portion of creative flow in the process. It took me a while to find my way back after such a major life upheaval.

I rewatched Raging Bull after making a film [https://vimeo.com/108906628] about roller derby for NN Contemporary Art’s project space. It’s such an elegant example of brutality done beautifully, and it has since fed into some themes of strength I’m currently exploring.

I also had the pleasure to visit Ikran Abdille [ http://ikranabdillefineartist.tumblr.com/ ] in her studio (which is almost the exact opposite of watching Raging Bull). I met Ikran when I led a SeeNN [http://www.seenn.org/]workshop and always love seeing how her work is developing.

At the moment I seem fixated on landscapes. I’m always inspired by Sarah Gillett. She has a sense of adventure in the way she works that makes me giddy. The asteroid tapestries from her recent show keep turning over in my brain. I’ve also been revisiting Lawren Harris’s sleek and graphic paintings of icebergs and mountains for years. The longer you look at them the more beautifully alien they get. And then there’s Jenny Morgan, Margherita Manzelli and Tara Marynowsky, who all do incredibly interesting figurative work that is not at all polite.

My work can be viewed on my website. I am delivering YOUR RELUCTANT DIPLOMAT a project that will take place in the Project Space at NN Contemporary Art from 28 – 30 April. As an American-born person living in England, I am regularly called upon by strangers and acquaintances to explain or justify the political actions and cultural output of my home country. No other time provides as rich an opportunity for these kinds of interactions as a U.S. presidential election. As reluctant, unofficial ambassador for the ugliest and most deeply embarrassing impulses of the American electorate, I will hold surgery hours in Northampton town centre during which anyone may discuss with me the aspects of my home country I most wish would disappear forever. I will use the time in between interactions with the public to build a body of information on Donald Trump, the subject of a majority of uncomfortable conversations I’ve had with strangers this year. Work completed in the space will include text, installation, and possible frustrated shouting.

Jessica was first interviewed in January 2015.