Sam Metz is a visual artist working across performance. Their interests lie in experimenting with the body in relation to the built environment. Their work will often examine movement, perception and architecture. Sam has trained in physical theatre and has a Masters in Architecture and Critical Theory from The University of Nottingham. Current commissions include Making Place, Primary (2018) and performance for Nicola Carter ‘Peer Pleasure’ (upcoming 2018). Sam was previously an Associate Artist at Nottingham Contemporary, Community Programmer at Nottingham Museums and now works as an artist, educator and researcher in museums and galleries within the East Midlands and is current Programme Manager at the LEVEL Centre, Derbyshire.

I have recently relocated to Derby after spending more than a decade in Nottingham.

My work is cross-art form and has a number of outputs – from painting to performance.

I am interested in notation as a graphic score that can be perceived by the body and used as a way of communicating movement direction. Creating notation is a system that allows me to capture patterns and rhythm that the body can respond to in a physical way. Notation sits in my practice as instruction and describes any made object, drawn score or architectural intervention (e.g. projection or sound) that is resonant within a given space and which enables a performer or visitor to respond physically. Previous examples have included live painting and projection, floor based installation patterns, drawn gifs that include repetitive rhythmic patterns and animations with repeated shapes. These forms of notation act as a provocation to inspire movement or dance. For me a physical response would be guided by the principles of Deborah Hay, who sets the provocation in her performance practice of ‘let my body be my leader.’ My notation objects and scores created are viewed as an extension of visual empathy and somatic (embodied experimental) practice.

I have been lucky enough to work at lots of galleries and museums and to be exposed to diverse practices – including meeting and working with other artists, which undoubtedly informs the way I work. I am very inspired by exposing myself to how another artist works as a performer, working with the choreographer Joe Moran who introduced me to the idea of game-play in choreography, has massively shaped my approach and thinking.

I think a lot of my work is also driven by my autism; I have a near eidetic memory for visual patterns, meaning certain patterns leave an after-image. My work allows me space to explore this.

I have been practising for over a decade. My socially engaged practice was developed in community work with organisations like City Arts and Cardboard Citizens working with people with disabilities and young people in vulnerable housing. I became at that point interested in alternative education and particularly because of theorists like Paulo Friere, in participatory practice that emerged from the participants’ lived experiences of oppression. I have since developed many projects that have social connectivity at their core and that are participant led. Some of the work that I am most proud of has; through action-research developed methods for co-construction of creative movement workshops for people with learning difficulties and autism, and particularly non-verbal participants.

I have always been interested in embodied practice, and particularly in how the body reads environments – my lecturer Matt Hawthorne persuaded me to study  postgraduate architecture at Nottingham University with philosophy, this helped me to ground some of my theories around somatics and embodied phenomenology which underpin my making and research. I would say that my route has always been practice based research – regardless of what organisation I am affiliated with, as a freelancer and as a gallery or museum programmer I am testing ideas out through my practice.

I don’t separate my teaching and making, as for me they inform my socially engaged practice. I returned to education training in 2014 supported by Warwick University – teaching drawing to A level students and then transferring my practice to the learning department at Nottingham Contemporary. This was an odd but rewarding process, trying to map a course to a gallery site when my mentors were used to visiting more formal education spaces. It helped me to be critical about what a learning experience is and what gallery engagement could do. My work here was driven by personal research into non-verbal methods of interpreting exhibitions – through sensory and embodied practice. I liked to get groups moving in exhibition spaces and testing ideas out next to artworks. I also took this physical approach to working directly in galleries when teaching at Nottingham Trent International College, Nottingham has such amazing art spaces!

Since finishing training I have taken up many socially engaged residencies, commissions and workshop opportunities as a freelance artist including one that reflects and has shaped my current practice best to date-a two year partnership project with Crocus Fields for Circuit Tate, Choreographic Objects, working with young people with autism. The project aimed to destabilize the privileging of visual and verbal responses to viewing art in an art gallery setting; instead they embraced alternative ways of exchanging conversations with the world through movement, touch and performance.  I have also taken on research projects for Nottingham Museum’s and programming and co-ordination roles in the East Midlands. I enjoy programming engagement opportunities for diverse audiences and being situated in spaces that create experimental work.

Your work has been described as being within the field of design anthropology. What does that mean?

At the core of the Design Anthropology approach is the idea that designing emerges out of movement and gesture; this allows me to think about how performance can be shifted by drawing, notation and intervention. Workshops, experimentation and embodied tests help me to reveal the generative nature of notations (how they can build ideas).

You use digital technology, how does it lend itself to a very physical practice?

That’s a lovely question. I recently went on a great training course for artists to explore emerging digital technologies at QUAD – it left me thinking I was more interested in critiquing technology than adopting it! Some of my work has been about attuning, noting the bodies neuro-muscular possibilities when interacting with technology. I have been particularly interested in choreography that emerges from interacting with ubiquitous technologies like mobile phones.

Where does a practice like yours find a platform for engagement or dissemination?

I am part of a collective called Guerilla Art Lab a queer live art group – we have been invited to ‘take-over’ a few East Midlands’ galleries. I have also developed solo and group works for gallery sites. Currently I am interested in curating work and am part of Underdog Curatorial a new intersectional curatorial group for cross-art forms in Derby. I am also enjoying sharing work online – with online residencies and collaborations.

My research projects around non-verbal approaches to interpreting collections are being supported by East Midlands museums – watch this space!

I am currently employing my practice at LEVEL Centre, where I have recently taken the post of Programme Manager. I am particularly excited to be developing resources that I hope will inform widespread organisational change and ideas around the possibilities for creative collaborations with people with learning difficulties, including profound and multiple learning difficulties.

I am hugely excited by a socially engaged meet-up group co-ordinated by the Engagement Curator Rebecca Beinart at Primary, Nottingham. This is because I feel like there is such a need for a community of practice for artists in the East-Midlands who work this way.

The artist whose work most interests me is Agnes Martin. Her work has formal simplicity and has natural aberrations that reveal the mechanisms of their creation, which I like. Her drawings look like they have movement in them and could be used as choreographic notation.

Paul Klee’s pedagogical notebooks inspire me because they so methodically lay out ideas for composing work. My other key influence isn’t an artist but the anthropologist Tim Ingold. 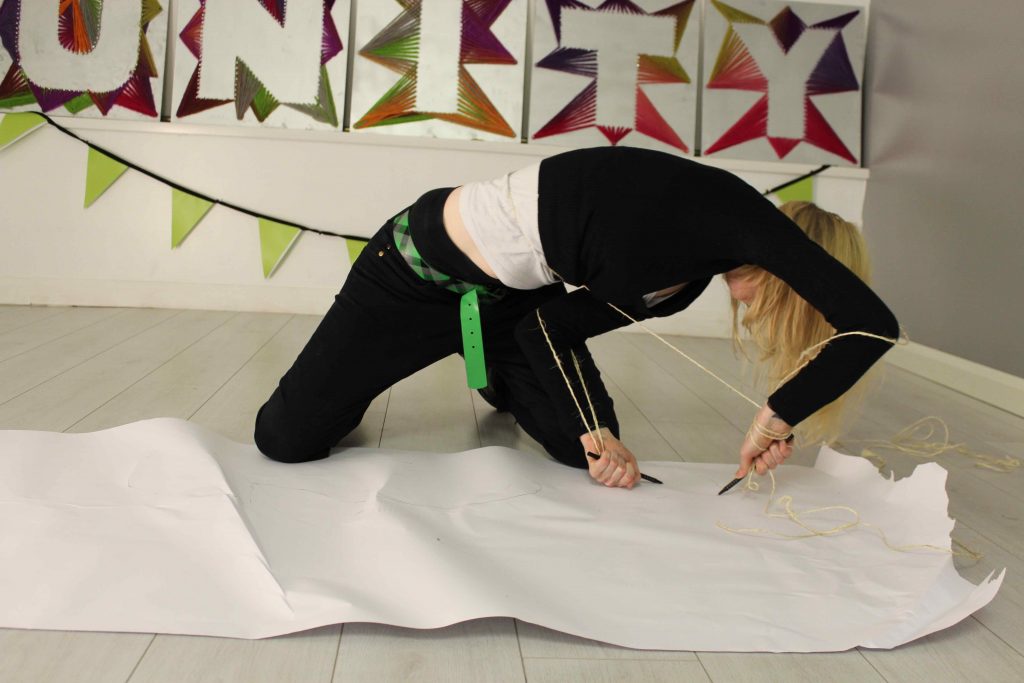 I have been collaborating with Bristol/Leicester based artist Katherine Hall to explore dance-drawing, creating exercises to build awareness of the movements that make us who we are and to reflect on the things or people we are supporting/holding. I’ve been exploring visual empathy to animate her choreographic notation – #morninginsidedances – to reflect the dynamism of the gestures that informed them, our early experiments are online. and sketchupresidency, an Instagram residency using the CAD tool Sketchup.

I will be performing for Nicola Carter in an immersive multi-disciplinary performance upcoming, ‘Peer Pleasure’ at Dance4.

I am currently completing a residency at Primary as part of their Making Place programme, a long-term programme focusing on learning from the city and use of public space, and I am involved in research projects currently at the LEVEL Centre in Derbyshire, particularly focusing on embodied practice and experimental contemporary art, collaborating with people with learning difficulties.

Sam was interviewed in April.

All images are taken by and courtesy of the artist, except where stated.