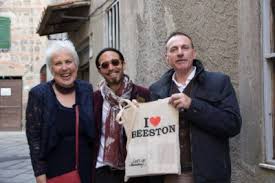 A 64-year-old female entrepreneur has started an art and culture driven venture set to put Beeston on the international map.

Marysia Zipser is heading up ACT (Art-Culture-Tourism) which aims to make the Nottingham town a hub for arts and culture. She launched ACT as an official registered organisation in May, having been running it on an international voluntary basis for three years.

Marysia said: “When I moved to Beeston, I thought that it was a goldmine for artists and creative business, with great industrial heritage and its location is perfect.  But with the demise of Beeston BID (an organisation set up to raise the town’s profile) there was nobody to co-ordinate all the annual events of Beeston and Chilwell.

“I want to make Beeston international – that’s my ACT mission.  And that is what I have been striving to do since December 2013.”

Marysia plans to continue doing this through sustainable art, cultural and tourism projects, collaborations and networking events, with future funding set to come from the Heritage Lottery Fund, the Arts Council and Creative Europe.

She also wants to see a creative hub in Beeston for students and business creatives to go to in the daytime and evenings, set up of artists’ studios, and hold an art exhibition in Nottingham city centre to introduce six international artists who she represents. These include Christine Zion from Canada, Joe Ganech from Belgium and Marcus Gilmore from Beeston.

Her mentor, Stuart Senior, main board partner at property company Gleeds, said: “Inevitably, Marysia’s style, resilience, energy, enthusiasm and vision for Beeston so far has been amazing. Getting recognition for the town has been fantastic and I’m sure the future of the arts and culture scene is in safe hands. Hopefully the establishment of ACT will encourage more support from the local stakeholders and attract funding opportunities.”

Marysia was born in West Bridgford and moved to Beeston in 2012. Her first job was at Covent Garden in the 1970s for Conran Associates/Habitat Designs and she has had some interesting jobs such as one at BBC Radio, where she would time the records in an office next door to Terry Wogan.

In the early 80s she did PR and promotions for the Penta Hotel Group and later worked for herself.

Following her successful career Marysia, a mum-of-two is now focusing on ACT. Part of the project’s mission is to embrace a fusion of multi-cultural creatives to act as one single voice to promote the town of Beeston.

Former successful projects she has been involved in include The Ghost Bus Project, which saw a collaboration between ACT, Italian visual artist, author and journalist Roberto Alborghetti, and Bartons. It generated TV and global press publicity in 2015 and continues to do so, building bridges between the UK and Italy. The project has since attracted other countries who wish to build a Beeston/Nottingham connection through the arts and this ‘great visual adventure in the land of Robin Hood’.

More information can be found at www.a-c-tgroup.com

Marysia has written articles on tourism, art and genealogy. Her article Travel is the Best Education in Life can be found at https://www.linkedin.com/pulse/20141117060908-241068011-travel-is-the-best-education-in-life?trk=mp-reader-card