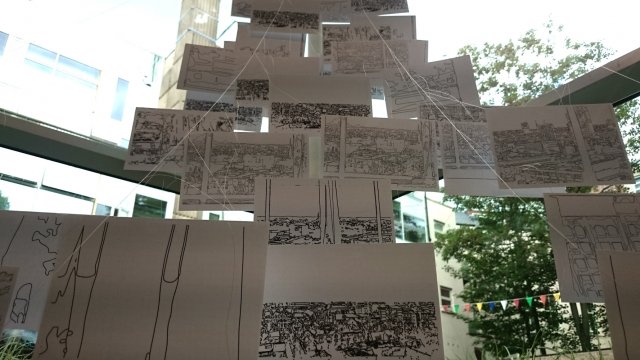 Ashokkumar Mistry is based in Leicester. He is a lens media artist working with video and photograph and since graduating with a degree in fine art in 1996 has been working as both an artist and curator contributing to exhibitions and creative interventions and developing new ways of engaging audiences and developing immersive experiences around the UK. His work has been exhibited at New Art Exchange Nottingham and Peepul Centre Leicester and  commissioned for the Southbank Centre. Recently Ashok’s photographic work has centred on the evolving fate of Britain’s plural cities and transition of the photographic image to the graphic. He developed Methods of Misunderstanding, a project that explored how data flows through situations and mediates our relationship with technology. He is currently developing projects in East Asia.

My central discourse deals with the global human desire to understand one’s milieu with in the context of the world beyond.  In particular I study how people from different cultures form “truths” from the data at hand and how that truth jars with the “truths’’ of others. Artworks explore contemporary concerns such as how data is mediated and formed into information, the uncertainty of the authorship and the evolution of a message as it travels through a multiplicity of unconventional cultural distillers, well beyond the institutionalised cultural gate keepers of the past. My work is nourished by actively engaging people to feed a work with source data or actively being part of the work. Rather than studying people I prefer to work with them in an attempt to understand their perspective, sensibilities, motives and goals. Looking beyond the surface traits such as identity I try to draw out both the rational and irrational that makes us who we are.

I’ve been practicing since graduating in Fine art in 1996.

I attended an event run by A-N and hosted by CVAN EM and Primary, Nottingham that focused on paying artists. The event was attended by a mix of academics, programmers and artists and offered a great opportunity to see both how other artist where responding to the thorny question of making a living as an artist and how academics and programmers saw the situation.  The diversity of opinions between various groups was interesting as it amplified current discourses regarding representation, public benefit and the role of cultural institutions.

Three artist that inspire me are Kara Walker, Theaster Gates and Pablo Bartholomew.  The thing that unites them is their approach to scale, ambition and value.  Kara Walker dynamically plays with motif and meaning, creating works that speaks both of the process and the materials that form them. Theaster Gates uses space and objects to envelop the viewer in the zeitgeist.  Pablo Bartholomew is a internationally acclaimed Photographer who, I had the chance to work with in 2012.  I learned a great deal regarding photography and art though, it was Pablo’s humanity and value for people that humbled me.

Ashokkumar was first interviewed in November 2014.