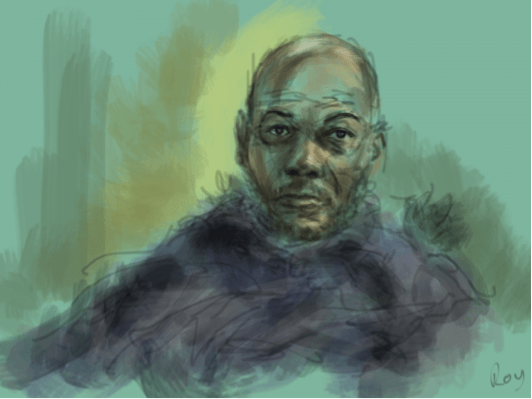 Mik Godley is based in Nottingham. He is a painter, art-school lecturer, and now also an iPad artist. His ongoing project ‘Considering Silesia’ examines issues of conflicting (in his case Anglo-German) heritage, cultural memory, identity, displacement and migration. Through these themes he observes the context of our evolving relationship with the internet and new media – our digital “way of seeing” – focusing on ‘virtual expeditions’ to his mother’s homeland (Lower Silesia – a place he’s never been to), a perspective on contemporary economic, social and political events and the very ‘analogue’ activity of painting, though most recent work has been created on an iPad.

Mik’s work has been exhibited from San Francisco and Baltimore to Zagreb, featured in several publications, received awards and critical acclaim. He has a studio at Primary in Nottingham.

I draw and paint pictures. Often using an iPad or my phone (I like “accessible technologies”) but it depends on what I’m doing. I last painted conventionally over a year ago, but I’ve started a series of sketches towards paintings on canvas. I usually work from internet sources: virtual explorations of Silesia where my mum comes from, through webcams, or Google, etc. Or I go on actual “field trips” locally by bus or train, drawing landscapes, buildings or people – whatever grabs my eyes – “skilling up” and practicing in preparation for the day that I really do go to Silesia.

Since the age of four – I was one of those kids that never stopped – but that was more than fifty years ago! I graduated from Leeds Poly in ’82, and was soon showing with an “achingly trendy” post-punk gallery in London until the previous recession, when so many galleries closed and I had to get a job teaching part-time in an art-school – I’m still there 25 years later! I’ve been an active member of Nottingham’s art community for many years, helping to stage exhibitions, festivals and spent ten years on the team establishing Primary.

After spending time on commissions and teaching, I’m looking again at a ruined and much graffiti-ed 1938 granite Nazi Mausoleum in Silesia – once in Germany, now in Poland. A FaceBook contact there put me on to it a few years ago, and to my mind, the Mausoleum’s present state acts as a fascinating ‘document’ of the history and memory of the Holocaust and European socio-politics from its inception to today. I did several sketches about it from YouTube and some very big watercolours based on screen grabs from Google Earth. Currently I’m working digitally via Street View.

Gutsy painters from the ’80’s like Schnabel, Fischl and Kiefer had as strong an influence on me as Dürer, Leonardo, Caravaggio and Rubens (they do tend to be macho males for some reason) with Tübke straddling both camps. Now painting landscapes, recently I’ve been looking at Constable, Turner and Friedrich. And I look at Hockney for his iPad work – though I’m rather critical of his simplistic approach. These days painters like Dumas, Rauch and Tuymans are technically interesting – with the god Gerhard Richter looming in the background – but I have a lot of fun looking at Paul McCarthy.

I projected “play-back” videos of iPad drawings commissioned by City Arts on their canvas dome in Sneinton Market for “Light Night”, where you see the drawings being created stroke by stroke, and had a show in their base in Hockley featured by BBC’s East Midlands Today. I also worked with First Art to show the “bus trip” iPad works they commissioned. These are now on my YouTube channel. Indeed, I often post things as they happen on FaceBook, so there’s plenty of stuff online – just Google me: there’s only one Mik Godley on the internet. Further ahead, I’m working with Attenborough Arts Centre of Leicester University to develop the Mausoleum project, aiming to create a big exhibition for their new gallery in 2019 or 2020. It’s a big project with a lot of work to do, and I like to plan ahead!

Mik was first interviewed in August 2015.