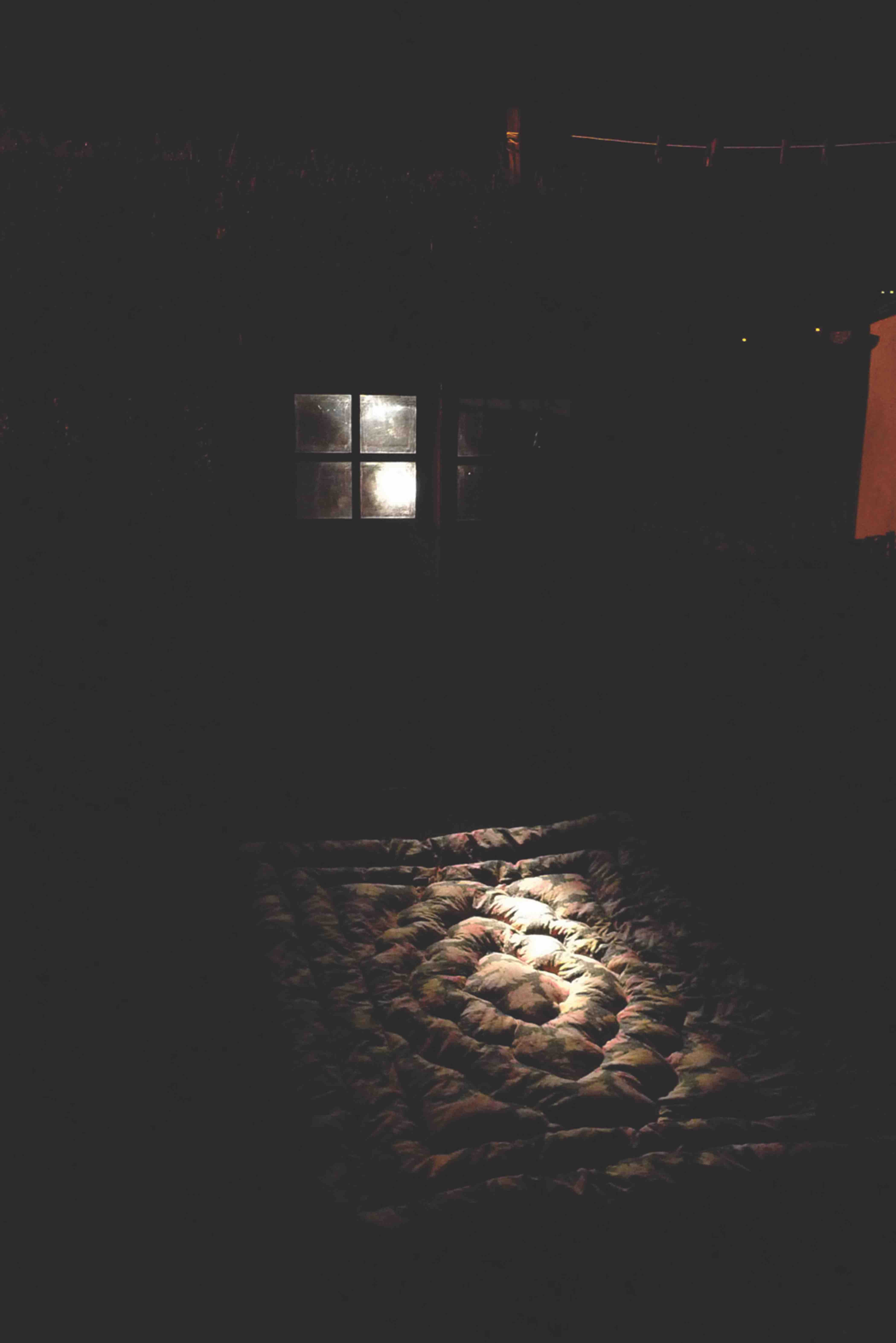 Olivia Punnett is an artist, curator & lecturer, whose diverse practice encompasses a range of media including printmaking, installation, film and projection. She holds an MA with Distinction in Fine Art, for which she received an AHRC award in 2013, and in 2015 was awarded the SIA commission from Sheffield Institute of Arts. Olivia is a member of The Editions Publishing Group, and her work is held in the British Library, The Tetley, The Ruskin Archive and the Tate Library and Archive.

I have a studio at Haarlem Artspace in Wirksworth, Derbyshire.

I use printmaking in both my process and resulting work, but cross into sculpture and installation, often using projection too. I am interested in Time & the remembered image, and how the photochemical mark can transmit these ideas. For this reason, a starting point is often 120 film photos but distortion (bleed & blur) and the phenomenology of reflection are then used. Separation from the original is important and handmade glass or lenses add to this. This separation paradoxically connects to the emotion of loss, but also moves closer to a sense of feeling that is time specific, a memory, a place, a moment. Both concealment and revelation.

The natural world has always been present in my life, I’ve always lived rurally, so this also is part and parcel of what I do.

Curating is something I am doing more and more now we have the gallery space at Haarlem Artspace, and curating the Internal Nebular exhibition at last years Wirksworth Festival, and Victoria Lucas show Where Rock & Hard Place Meet this year, have both been highlights for me.

I started on a foundation course, which I loved, and followed on to Falmouth College of Arts. However whilst at Falmouth I struggled and left the course early. I moved away to the Caribbean where I got married and had my first child, and returned to the UK later. When we moved up to the peak district I started practicing again and this time I approached it in a different way. This was around 2011 and when I think I really started. My MA at Sheffield Hallam was a great experience and one I felt shored me up a lot. It also re emphasised the importance of operating from a place that is very connected to the landscape around it.

Your practice encompasses printmaking, installation, film, sculpture and projection. What does working across these disciplines bring to your work?

I’ve always been attracted to artists who are cross-disciplinary, Susan Hiller for example. Combining these things moves me closer to the ideas and emotions I’m trying to capture, and allows me the flexibility of space and light; and the ability to pull from different imagery simultaneously. Walter Benjamin’s ‘auras’ are a consideration here, to be able to combine these technologies or elements of work the way I want is important to the work itself. Benjamin’s auras can be seen as a distance or a veil over an object, but it’s a contradictory Idea, and relates back to the paradox I mentioned above.

By separating the work into disparate elements or by putting a physical veil in place in the work, for me i am tackling its loss, the unique moment it came from, and bringing its presence into view. Uniqueness, duration and transience are all things i am chasing. Benjamin also suggests we respond to technology by recognising what’s been lost before it. I use analogue technology often and the ontology of the photochemical mark is really important to me, this carries across mediums and is important in my printmaking also.

You are interested in paper not just for its material qualities but also for its intrinsic characteristics and historical narrative, can you expand on that for us.

My residency at Paper Gallery in Manchester very much informed this, and was a great opportunity to be able to undertake. Approaching paper with the knowledge of its history also meant choosing to utilise it.

Hard white paper is can be read as ‘blank canvas’, as not the work itself but the base or receptacle for it. Considering the material more deeply, what qualities it can hold etc, and then using these in the work makes it more a part of the work itself.  Visually transmitting softness from showing its surface qualities, Japanese tissue papers for example, set up another dichotomy. Translucency or texture can both harbinger the ability of the image to be read succinctly but add its own ‘aura’ to the work, so it’s another balance to strike.

It’s been written about your work that it attempts to capture the ephemeral, shadows, reflections, memories. What motivates your interest in doing so?

These Proustian in-betweens are very special to me and to the way I interact with memory, place, people and the world around me. The phenomenology of reflection itself never ceases to hold a kind of everyday magic and this is linked with beauty and instability; loss and a maudlin view of the past perhaps! Bachelard’s poetics of space was a hugely important find for me at Falmouth University and recognising that people remember differently. I don’t think I remember the same way as other people and this is an inspiration to draw on, or something to worry about!!

To quote Philip Pullman “Everything that touches human life is surrounded by a penumbra of associations, memories, echoes and correspondences that extend far into the unknown. In this way of seeing things, the world is full of tenuous filaments of meaning”.

Tai Shanni’s exhibition at the Tetley in Leeds I felt touched the inner core of me. This was to do with its feminine power, and the way so many different ways of working where intertwined again. The use of monologues, storytelling,  and the voice is such an archaic ancient thing, this perhaps connects with being human in its deepest sense and I felt very affected by it. The use of both fiction and nonfiction text was great to see. The way this was interwoven was really exciting. I draw from fiction a lot, and am always trying to find other artists who use it in their work.

Trisha Donnelly, Tacita Dean – because of her use of analogue media and film, as well as the laconic ephemeral subject matters in her work – Hiller as mentioned above, Becky Beasley and photographer Katherine Mager. Robert Rauschenberg is someone who has informed my ideas of composition and of printmaking. His practice feels very natural to me and I also love his use of the photographic and transferred image.

Who would you like to do a studio visit with you?

Bill Viola, because of his subject matter, and any of the artists mentioned above.

Where can we see your work?

I have exhibited quite a lot this year, My work was in the Manchester Contemporary last weekend, I had a solo show Every Point of the Universe is Also the Centre at Paper Gallery Manchester in March, and I curated the Where Rock & Hard Place Meet exhibition by Victoria Lucas at Haarlem Artspace for this years Wirksworth Festival, so I am looking forward to hibernating and making work just for me!

Past work can be seen on my website also.

Olivia was interviewed in November 2018.

All images are courtesy and copyright of the artist.