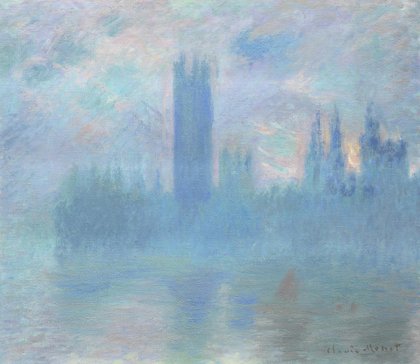 Review by Robert Richardson of “Impressionists in London, French Artists
in Exile (1870 – 1904) ” at Tate Britain, London.

In 1870/71 and years immediately following, French artists arrived in London to
escape the horrors of violence and destruction in their own country. This was the
result of the Prussian siege of Paris and the defeat of the French army. The
humiliating surrender terms helped prompt the radical insurrection of the Paris
Commune, which in turn led to its brutal suppression, culminating in “la semaine
sanglante” and the wholesale slaughter of the Communards by French
government forces. Artists were faced with a depressing situation and its
adverse effects on their earnings. Others were more directly affected: the
Prussian army turned Pissarro’s family home into stables, and the same army
ransacked Sisley’s house.
This Tate Britain exhibition not only presents Impressionists, but also work by
other non-Impressionist artists. There is, considering the title of the exhibition, a
little too much of what at times seems like padding. Nevertheless it provides an
interesting and wider context of exile, showing that refugee artists needed
support networks. Ones evolved that were the French helping each other, an
example being those who had attended the “Petite Ècole”. Legros, who had
settled successfully in London earlier, in 1863, was the focal point for this French
artists’ version of the “old school tie”.
In 1870, Paul Durand-Ruel, who has his own historic role as the most important
art dealer for Impressionism, moved to London and opened a gallery in New
Bond Street. While Daubigny (one of Durand-Ruel’s artists) was painting by the
Thames, he encountered another, younger French artist also painting there: it
was Monet, twenty-nine years old and evading military conscription. In an early
room of the exhibition is a crucial moment of a painting by each artist depicting a
Thames-side scene. It was in London, and through this meeting, that Durand-
Ruel took Monet onto his roster, its self massively significant. Monet’s stay,
though, was not a happy one: he had work rejected by the Royal Academy and
failed to sell a single painting. The portrait of his wife, Camille, ‘Meditation, Mrs
Monet Sitting on a Sofa’ (1870) embodies the dislocation of exile. This is in sharp
contrast to Tissot, who effortlessly stepped from one success in Paris to another
in London. His network was essentially wealthy English supporters and
collectors, and he ended up buying a smart house in St John’s Wood, staying on
until 1882. Not an Impressionist at all, his figures now look as if they were
Photoshopped onto their backgrounds: “Monsieur Tissot, did you time travel and
discover the Magnetic Lasso Tool?”

It is in the final rooms that the exhibition comes alive with some wonderful
Impressionist paintings. Pissarro and Sisley in particular, who enjoyed, as
outsiders, some of England’s sporting quirkiness (regattas and cricket) and the
expansive parks not present in Paris, seem at ease and the work blossoms,
literally with Pissarro’s gorgeous ‘Kew Gardens, Rhododendron Dell’ (painted on
one of his returns to London in the 1890s). In other paintings, Pissarro achieved

soft, subtle effects: shimmering light and colours from a combination of
Pointillism and Impressionist brush strokes. There are two paintings by Pissarro
of cricket matches, of which he became something of a devotee, later playing it
with his children in France.
And what of Monet? He returned to London, successful and wealthy, in 1899,
1900 and 1901: each time staying at the Savoy. Some of the Thames Series he
produced during these visits make a superb and triumphant penultimate room.
There is also his stunning depiction of Leicester Square, jolting us into a
twentieth century Modernist aesthetic.
The final room is presented as a coda, with Derain, at the encouragement of his
dealer, paying homage to Monet’s Thames Series with full-on Fauvism. Was this
necessary? It would have been better, I think, to end with Monet.
Tate Britain’s exhibition demonstrates, in a way writ large, the positive benefits
from providing a place of safety for refugees, and helps us to acknowledge that it
remains a privilege being the country to which these brilliant and innovative
artists came.

About the reviewer
Robert Richardson is a visual artist and writer. His work is included in Artists’
Postcards: A Compendium (edited by Jeremy Cooper, published by Reaktion
Books, London). In 2014, his solo exhibition TextSpaces was exhibited at Eugen
Gomringer’s Kunsthaus Rehau in Germany. One of his designs will be included in
a book about Leeds Postcards, to be published in 2018 by Four Corners Books. He is a member of the Biennale Austria association of contemporary artists.