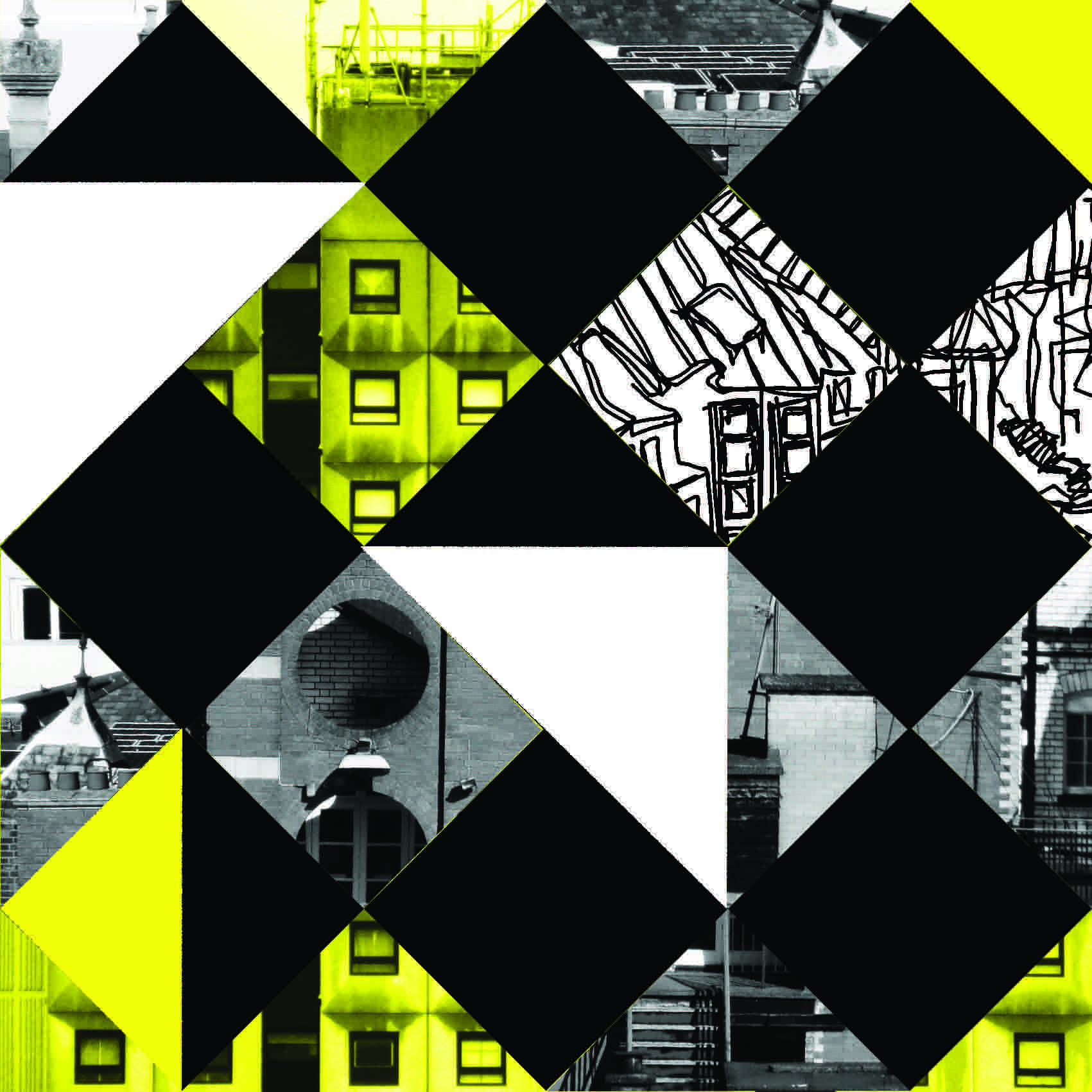 Khush Kali is a Leicester-based artist who uses collage, drawing, digital media and sculpture to explore the everyday experience of the urban environment, influenced in particular by the history and context of Leicester, migration and cultural identity. She has exhibited in the UK, USA and India. Her work is held in the public collection of the City of Leicester Museums Trust and in private collections in Canada, India, Malaysia, the Netherlands and New Zealand. She has a BA and MA in Fine Art from De Montfort University, Leicester. She is passionate about inclusive and accessible art-making for all and regularly works with children, young people and community groups of all ages from all over Leicester.

I’ve always worked in different mediums – from drawing and painting to digital images, from textiles to sculpture and installation – but it’s all essentially collage. Cutting things up, mixing them up, bringing them together in different configurations is how I’ve always instinctively worked. It’s also always been about the city and how different histories and cultures mix and overlap in the urban environment. Around 2013 I made a lot of work taking architectural details from one part of the city – taking digital photos and then isolating shapes and patterns using Photoshop – and dropping them in another location by means of collages and murals. It was sampling, cutting and pasting, remixing basically. More recently I’ve focused on what it means to be second-generation, having an Indian and Ugandan Asian heritage but born and bred here in Leicester. The process of re-discovering a culture, re-claiming that imagery, how authentic is it for me to re-claim anything? For my last exhibition, commissioned by Two Queens Gallery for their Project Space, I re-imagined the tools and processes employed in the production of bandhani, a centuries-old textile tie-dye decoration technique originating from Gujarat. Traditionally, hand-held wooden blocks would have nails embedded in various patterns creating a guide for tiny knots to be made in thin material which would later be tie-dyed. I re-created these blocks as purely aesthetic objects made from plywood. Bandhani moved away from the traditional tie-dye technique to being replicated by block printing, and nowadays is digitally printed. You can get your nails painted with the bandhani motif, which makes no logical sense for a tie-dye technique but looks amazing. Visually it speaks strongly of a certain place yet it’s been created in a completely different place and time, which I connected to my experiences of being second-generation, of being British Asian. I’ve been lucky enough to make [something resembling] a living mainly from artistic and creative work since finishing my MA in Fine Art in 2012, through commissions and freelance and sessional work for organisations such as Leicester City Council, Leicestershire Partnership NHS Trust and Soft Touch Arts. I regularly work with children, young people and older adults right across the city: New Parks, Beaumont Leys, St Matthews, Belgrave. I feel a connection with all these groups and areas of the city.

My practice is really made up of these two halves: my own work, which I sell and exhibit, and the workshops and sessions I teach and facilitate. Lately I’ve been thinking a lot about how I could bring these two halves together into a whole.

I was 26 when I did my Foundation and started studying art, 10 years ago. Before that I’d worked mainly in fashion retail as a visual merchandiser, dressing windows and mannequins and creating in-store visual displays. I loved it but I got to a point where I felt I needed to throw myself into being creative without the commercial agenda. So I did my Foundation and then my undergraduate and Masters degrees (both in Fine Art), all at De Montfort University, one after the other. Just as I was finishing my MA, in 2012, I was invited to work on an exhibition commissioned by Leicester City Council to mark the 40th anniversary of the arrival of Ugandan Asians in Leicester. This project completely changed my approach to making art, popping the art school bubble I’d been in until then. It got me thinking about the history of the city I’d lived my whole life in, the nature of different histories and cultures mixing and overlapping I mentioned earlier, and the visual and social traces of this across the city. This remains the biggest influence on my practice.

Your work spans collage, drawing, digital media and sculpture. What does the range give you that one medium couldn’t?

I tend to work quite frenetically. When I’m playing around with an idea or a narrative, I need to see it in some form really quickly. I need it to say something – anything – back to me straightaway so I know where to go with it and get some momentum going. It’s definitely an insecurity I have. I just go straight to whichever medium gives the most immediate or closest form to the idea, in the quickest time. Later it might develop into something that requires a lot more actual making, like the textile pieces or the plywood objects or the digital collages. It can also go the other way too, for example the From Leicester to Vadodara series developed from somewhat intricate paper collages into very quick constructions with found materials. I imagine that if I stuck to one medium, if I wasn’t vibing with the work one day, I’d get disheartened really quickly.  Working with a range of mediums, I can quickly flip it and approach it from another angle. Translate this collage into a sculpture and what happens? What happens when I cut up, sample and remix these photos? What is this new thing saying? I think this way of working goes right back to the way I was taught during my Foundation course.

As someone who takes inspiration form the urban environment, how do you feel that your work changes with urban demographic, political, social and cultural shifts?

I’ve been thinking about this a lot lately. I was born in Leicester and I’ve lived here my whole life: Leicester has shaped me as an artist. The work I was making a few years ago, From the 12th Floor and Urbà for example, documented my visual analysis of the city around me. Then I went to India and the work I made in response was really a way for me to process that experience and what it meant to re-connect with that culture. Currently I feel like I need to re-connect with Leicester, to pay attention to what the city is saying now, today. This relates to what I mentioned earlier, about bringing the two sides of my practice together. The groups and communities I’m paid to work with, to engage with, to facilitate in creative activities, are often labelled as under-represented and “hard to reach”. In terms of the local scene, it’s really exciting that there’s a growing sense of commitment to making Leicester a place that people from outside the region come to to experience art and culture and also, importantly, that artists of all art forms have reason to stick around here after finishing university. Places like Two Queens Gallery, Leicester Print Workshop and Soft Touch’s new buildings and the new gallery at Attenborough Arts all contribute to this. There’s still a long way to go in terms of the audiences that actually come through the doors accurately reflecting the diversity of the city itself but I’m heartened by the venues and organisations who are keen to address this and I want to be involved in making it happen.

How important is your own cultural identity and heritage to your practice?

I’m still working that one out. I hadn’t explored it at all until I was selected for an artist residency at MSU Baroda in Vadodara, India, in 2014. I’d been to India as a really young kid – so young I didn’t really remember it – but I’d completely turned my back on my Indian heritage as a teenager. I found the month-long residency a really intense experience. The heat and the noise and the chaos were totally overwhelming but re-connecting with my cultural background was a revelation, one that I’m still getting my head around today. Some of the work I made in response to that residency, a series of digital collages titled Before There After, was recently bought by The City of Leicester Museums Trust for its public collection which I’m massively thrilled about and will be for a long time. Another series from the residency, Baroda, Baroda, has been exhibited at the Bakalar Gallery at Massachusetts College of Art & Design in Boston, MA, USA, which was also really exciting. So exploring my cultural identity through the art I make has been significant both personally and professionally. But being of Indian heritage is just one aspect of my identity. There have been some incredibly significant changes and realisations in my personal life over the last 12 months, to the point where I sort of don’t really know who I am now, but in a totally good way. My hope is that by identifying and expressing the specifics of who I am, I can express something more universal, and that this in turn encourages others to express themselves too. Having said all that, most people are creative and do express themselves, it’s just that it isn’t recognised as “proper” art and culture. Maybe what I’m actually interested in is supporting more everyday and down-to-earth art forms and cultural production to be recognised – the art and culture people create and produce in their homes and communities, in their streets and workplaces. Can you tell I’m still figuring this out?!

I’m reading Art Power by Boris Groys at the moment, which is turning a lot of what I thought I knew or wanted to do inside out and upside down. Having not really read a lot of writing about art since I was at university, it’s quite challenging – I’m finding the text quite dense in places and I wouldn’t dare to paraphrase it at this moment – but it’s deliciously challenging and very provocative and it’s exactly what I need right now.

Francis Alÿs and Jeremy Deller for the way they bring together the people, politics and history of a specific time and place; similarly how Yinka Shonibare pulls together questions and notions around cultural and national identity, race and class; also Stephanie Syjuco, Steve McQueen and susan pui san lok. More locally, I really enjoy Daniel Sean Kelly and Sam Francis Read‘s work.

Khush will be taking over our Instagram profile during July.

Khush was interviewed in August 2017.

Images courtesy of and by the artist apart from where stated.