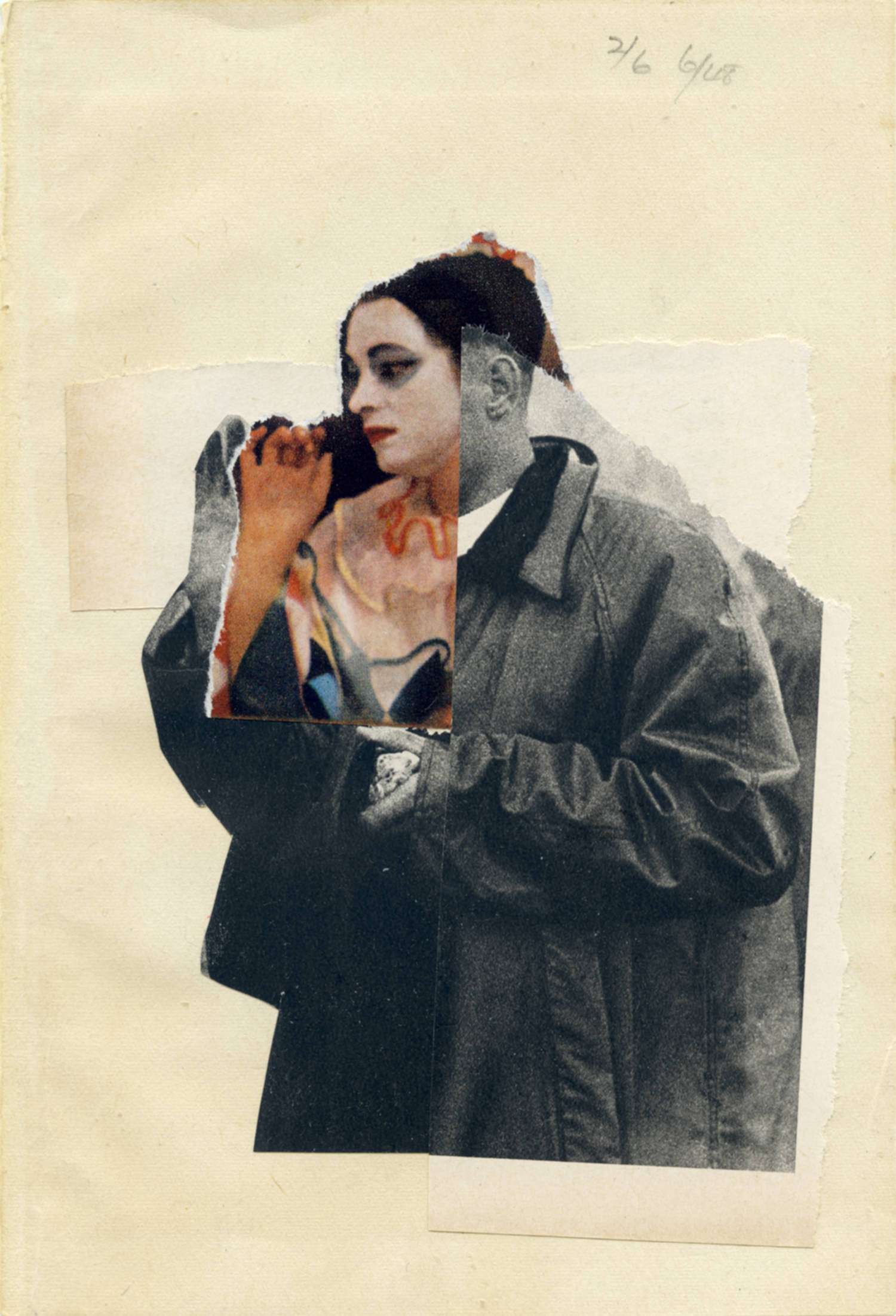 Mark Watkins is based near Derby. He uses discarded fragments of the past and present which are reimagined in accidental or deliberate juxtapositions to create new images – surreal worlds inhabited by exciting new possibilities. Mark is also a graphic designer with experience in the areas of lifestyle and culture.

I’m based in Willington, a village 5 miles outside Derby having moved from London in 2001. Two years ago I had a separate studio built in the garden to accommodate the collage. I really needed a bigger work surface and somewhere to store piles of source material! This studio means I can make a mess and leave any work in progress. Having a dedicated space has made me much more productive.

I create analogue collage. Cut or torn imagery and paper is juxtaposed, sometimes layered and reassembled. The work tends to be small in scale and mounted to cardboard, wood and other objects such as vinyl records. The underlying theme of my work explores and references memory and dreams. How memories are stored over time, how they can surface at any given, random moment and how they are lost (some temporarily) or become fragmented often into smaller memories. I’ve always been astonished by the quality of images that can manifest themselves as part of a dream or a nightmare. More often those (moving) images are simultaneously real and unreal; some can be recalled and described in a literal way, but most are harder to describe and are recalled as nonsensical. Some dreams tend to be more abstract and all that can be recollected is a mood or a sensation. A collage can begin with a specific idea or theme or it can be triggered in response to imagery that catches the eye. The process itself is very playful and I find that better results are achieved when you allow the interaction of fragments to be more intuitive. The rearrangement of images can also offer up completely new ideas and meanings often revealing something that hadn’t occurred in the first instance. Making a collage is a slow process but one I also find extremely therapeutic. A great deal of time time is spent simply looking through books and magazines.

My practice tentatively started seven years ago. Collage as a medium has always been one that I have enjoyed looking at. I was always taken with the idea of artists using found items and imagery to create new images. As a graphic designer I have always been interested in the visual arts and always collected books, magazines and all manner of printed paraphernalia for reference. I made a decision to start making collage given that I had plenty of material to start working with.

You also practice as a graphic designer, does this influence your arts practice, or vice versa?

As a designer I think the most obvious influence on my practice is the way I consider composition and the use of space. To begin with I would find myself making work which is what I would describe as ‘clean’ – intricate cut outs, very carefully arranged. As my confidence has grown I have developed a looser approach and more often use tearing rather then cutting as a technique. I have had one client request to incorporate collage into a poster design which worked well. The practice doesn’t directly influence my design work.

References from popular culture are evident in your work but at the same time, the work depicts or evokes a bygone era. Where is your imagery drawn from?

The majority of my source material is what I describe as the ‘discarded’. I have a great love of photography and have a healthy collection of old photographic books, Hollywood film annuals and vintage magazines like National Geographic, the majority of which are from the 40s, 50s and 60s. My attitude towards this old material is that it breathes new life and ultimately new meaning into them. Modern society’s throw-away attitude is more prevalent than ever so I find it really satisfying to be able to reuse and recycle. Most books end up on a shelf or in a cupboard and are never looked at again. I collected stamps when I was 11 years old and have kept the two albums. A few years ago I started looking at them afresh with collage in mind. This led to a series called ’Memoranda’ which incorporates a series of heads on stamps. When they have been exhibited those particular stamps are being looked at – they’ve been given a new life in a completely different context. Aside from pictorial imagery I keep paper and card – the older the better. The look and feel of paper is very important in the work. I get excited about how a piece of paper tears and the look of a torn edge.

The imagery and the fragmentation of that imagery creates an unsettling feeling. Are you creating a commentary of some kind through the work?

One of the most exciting aspects of collage is generating the source material to work with. If you find a photo of a person and remove it, the person and the remaining photo can appear or feel different. Something relatively innocuous can either suddenly seem sinister or even funny. There are so many aspects of society, both locally and globally that filter into the consciousness. I don’t set out to make overtly political statements but I do get drawn to darker themes which I try to allude to in the work in a subtle way. I did create one series which was triggered by hearing a news headline on the radio. Like a lot of art and poetry it can be open to interpretation.

The main event for me in 2017 was undoubtedly visiting the Rauschenberg retrospective. More about him in the next question. There were two other notable highlights. Tate Modern’s ‘Soul of a Nation’ (Art in the age of Black Power) was one of the most exciting exhibitions I had seen in a while. An eclectic mix of painting, photography, sculpture, prints and graphics. I was introduced to the extremely powerful collages of Romare Beardon and exquisite photographs by Roy DeCarava – extraordinary use of light and dark. I discovered the Hatton gallery online because of its dual exhibitions of Pop Art and collage. This prompted a two day visit to Newcastle upon Tyne purely to visit galleries. On display were some very small collages by Kurt Schwitters – I came away very inspired!

Robert Rauschenberg is an artist whose work I am constantly inspired by. Despite huge diversity in mediums, materials, techniques and concepts there is a common thread which is his original use of found objects and images – literally making art with anything. He was also one of the worlds great collaborators. Sixties Pop Art is undoubtedly my favourite body of work and for me Sir Peter Blake is leader of the pack. Like Rauschenberg I have always been thrilled by Blake’s use of the world around him making us look at the familiar in a new way. As I’m developing my own work I have become more interested in how to create a mood within a piece of work. The films of David Lynch are an example of someone who pays great attention to generating a mood or a feeling. I am also attracted to the unsettling nature of his work; a very blurred line between dreams and consciousness.

Mark was interviewed in January 2018.

All the images are courtesy of and take by the artist, except where stated.