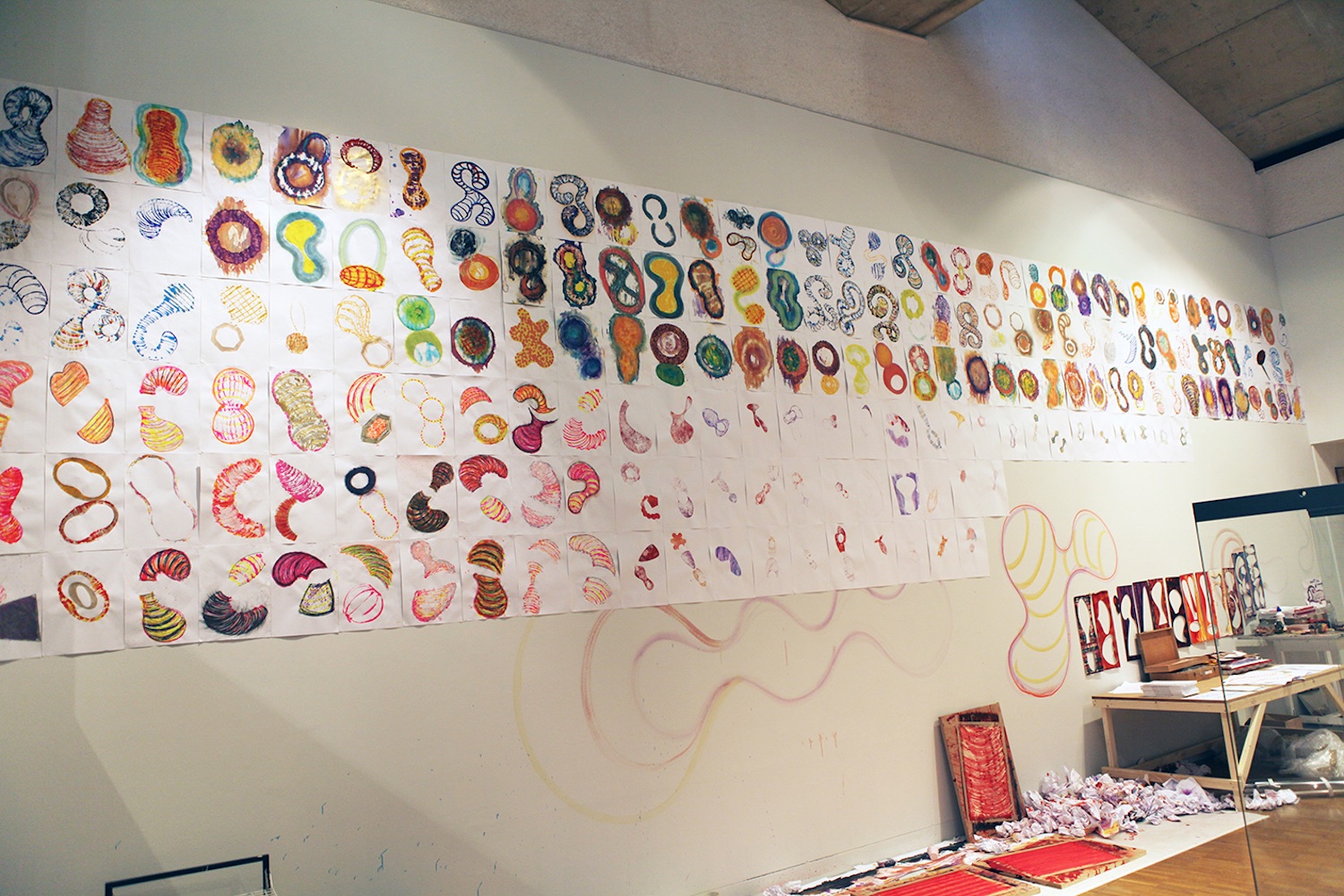 Michael Shaw is a practicing sculptor and Curator of Exhibitions at Burghley House Sculpture Garden in Stamford, Lincolnshire. Over a twenty year period Michael has participated in multiple solo exhibitions in the UK, group shows around the world, and has received numerous public commissions. In 2005, he completed a practice-led PhD that explored Donald Judd’s concept Specific Objects. Alongside creating and curating sculpture, he teaches at the universities of Derby and Loughborough. Most recently he was selected for the 2019 OPEM residency at The Collection and Usher Gallery in Lincoln, for which he created a working studio in the gallery where he has carried out CNC paper cutting (a machine-aided method of precision cutting) and drawing responses to the museum artefacts.

Near Loughborough, but I have a studio at Eagle Works in Nottingham.

I am a sculptor who makes site-specific responses to architecture and museum collections. The resulting inflatables seek to synthesise sculpture and architecture through direct physical interactions and by considering the building a mould that forms and informs the sculptures’ geometry. Whereas my work with collections responds to the form, materials, techniques and aesthetics of artefacts.

I have been practicing for over 20 years, having followed the norms of a Foundation course and then a degree in Fine Art. The most significant developments were precipitated by completing a practice-based PhD at the University of Gloucestershire under Professor Andrew Stonyer between 2001 and 2005. This explored Donald Judd’s sculptural concept Specific Objects, and confirmed the value of elliptical and sinuous geometries to my practice. Beyond this, it also acted as a catalyst for the emergence of light works and inflatables as two areas of future interest.

You use digital 3D modelling software to make pieces that seem almost physical in nature. Is this an example of the paradox that is part of your enquiry, or more simply, made possible by that technology?

Most of the work I create emerges in two ways, either through drawing on paper or in the CAD environment. There is no doubt that 3D printing and laser cutting has expanded the range of work I have been able to create. It has also allowed me to create site-specific inflatables that from a technical perspective are physically accurate to the cm. Laser cutting permits the interlocked Perspex lattices and 3D printing, forms of complexity and subtlety. Whilst many geometries have become physical, other explorations have remained virtual. For example, my animated drawings explore one of the fundamental aims of drawing, if not art in general: how to project the illusion of three-dimensional space into the planar. The latter is especially relevant to the sculptor, and intriguingly animation appears well placed to recreate the perambulatory and kinetic nature of experiencing sculpture by manipulating the observer’s viewpoint by proxy.

Are your drawings works in themselves, or studies for sculptural works?

They could be either; that said, often the most useful drawings are not the best drawings per se. Beyond simply experimenting whilst drawing, I try to use a range of materials/tones/colours to simulate my thinking about the materials I might then use in making sculpture. I would never draw something I have made, as I am not interested in the observational aspects to drawing. I draw to create things into being.

Many of your works are brightly coloured, expansive, seductive, playful, and often sited in historic or formal settings, or within collections. Are they site responsive or site disruptive?

The large inflatables are always site-responsive and sometimes site disruptive. As the breathing inflatables have increased in size, they have increasingly challenged the architecture of their hosts. Often viewers can see another part of the building but have to walk all around the sculpture to get there. So, they are disruptive to the possibilities of movement, and yet displacement is minimal because well over 99% of their volume comes from the space itself in the form of air. You mention their bright colour, and this is important, as it usually bathes the surroundings with a luminous hue. The earlier sealed inflatables in transparent shiny PVC also drew their surroundings onto their surfaces as reflections and when suspended moved on the building’s convection currents. These works denoted a shift from making autonomous sculptures into the realm of the site-specific.

If you’re an artist and you can’t self-motivate you’re in trouble. Richard Serra talks about work evolving from work, and this mantra seems to hold water. The trick, like being a shark, is to not stop moving.

I sometimes think not giving up! Whilst pride may come before a fall, I still feel my show at the Royal Albert Memorial Museum (RAMM) in 2017 was a good representation of my attempts to extend the language of sculpture. With the aid of the curatorial staff and exhibition designer it was also extremely well presented. 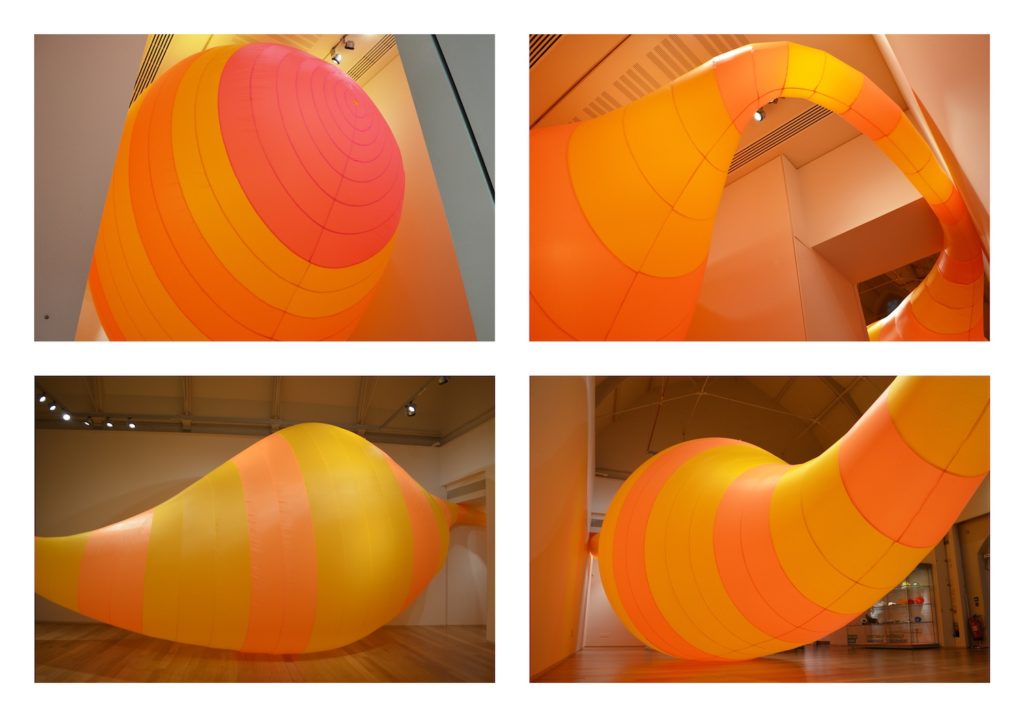 I also think that the new inflatable INF23, which will premiere in September at Left Bank, Leeds sits atop the last 15 years work. It is dynamic, ambitious and brings together all of the successful aspects of its various predecessors in one sculpture. It is significantly large at 26m long, 12m wide and 8m high, meaning it cannot be viewed from one viewpoint. Instead, a series of experiences and spaces unfurl as you move around it. Its swollen bulbous bee abdomen towers meters over viewers, one of its apexes continuously curves seductively and at other points a network of tubes crisscross at different heights. Its Dr Seuss-like stripes and high-vis colouration hopefully combine to create a dynamic, fun and exciting experience.

INF20 installed at Royal Albert Memorial Museum, Exeter, 2016What have been the biggest challenges to your practice?

Time and money! The eternal problem of finding the time and having the money. It is no secret that most artists have another income stream to support their practice. I am no exception, teaching at Loughborough University and curating the sculpture garden at Burghley House.

The da Vinci drawings on tour recently were of course exceptional, amongst those at Derby Art Gallery and Museum was one where Leonardo essentially foreshadows animation and Eadweard Muybridge’s photographs, with a seeming cavalcade of horses in blurred motion. I am a big fan of contemporary dance and whilst my favourite Netherlands Dance Theatre (NDT) have not been round in a while, I have seen some interesting performances recently at the Curve, Leicester. For example, Alexander Whitley’s 8-Minutes, which was really effective in combining sounds, projected imagery and movements, as well as the Ronald K. Brown founded Evidence: A Dance Company. Hew Locke and Haroon Mirza both had some strong pieces in their recent solo exhibitions at the Ikon, Birmingham.

Richard Serra, Donald Judd, Brancusi, Bernini, Michelangelo, Van Eyck, Van der Weyden, Rembrandt and Anselm Kieffer top the list of sculptors and painters. Serra’s Matter of Time at the Bilbao Guggenheim and Donal Judd’s 100 Cubes at Martha, Texas, are my highlights of recent sculpture. I have come to admire Mark di Suvero a lot in the last few years and think his sculpture is important for its energy and delineation thereof. I am also rather partial to Basquiat and Basil Beattie’s paintings for similar reasons. I think Phyllida Barlow is ploughing an interesting furrow with her painted sculpture as does Joanna Vasconcelos with fabrics. I look a lot to architecture, perhaps more than sculpture, as the most significant developments in form generation are occurring there; possibly because they have embraced CAD and parametric modelling. My next ‘project’ is to really learn Grasshopper, the parametric modelling plug-in for Rhino3D.

I could not say with absolute confidence as part of the joy is finding out, so I try not to plan forensically. The site-specific inflatables require buildings with architectural features to which they can respond, so I hope to continue finding venues where this is possible. Notwithstanding that I have several crates full of inflatables and could probably fill an aircraft hanger with them, I would like to further their ambition and scale. Beyond this, just to expand my repertoire of geometry, materials, techniques and aesthetics. Most of all; to make works of beauty.

I cannot imagine it would do much harm if Larry Gagosian, Jay Jopling or any of the world’s major curators happened to pop by! But in all seriousness, I would happily have a tutorial from any of the aforementioned artists.

I will be artist in residence for the Wirksworth Festival through summer, with some of the initial research on show at this year’s event, followed by a more consolidated exhibition in 2020. The site-specific inflatable INF23 will premiere in September at Left Bank, Leeds (2nd – 28th September 2019). I will also have a show at the National Centre for Craft and Design, Sleaford in 2020. Form and Function, the exhibition I curated at Burghley House, Stamford runs daily until 3rd November and is full of great sculpture by 16 interesting artists. Well worth a visit!

Michael was interviewed in July 2019.