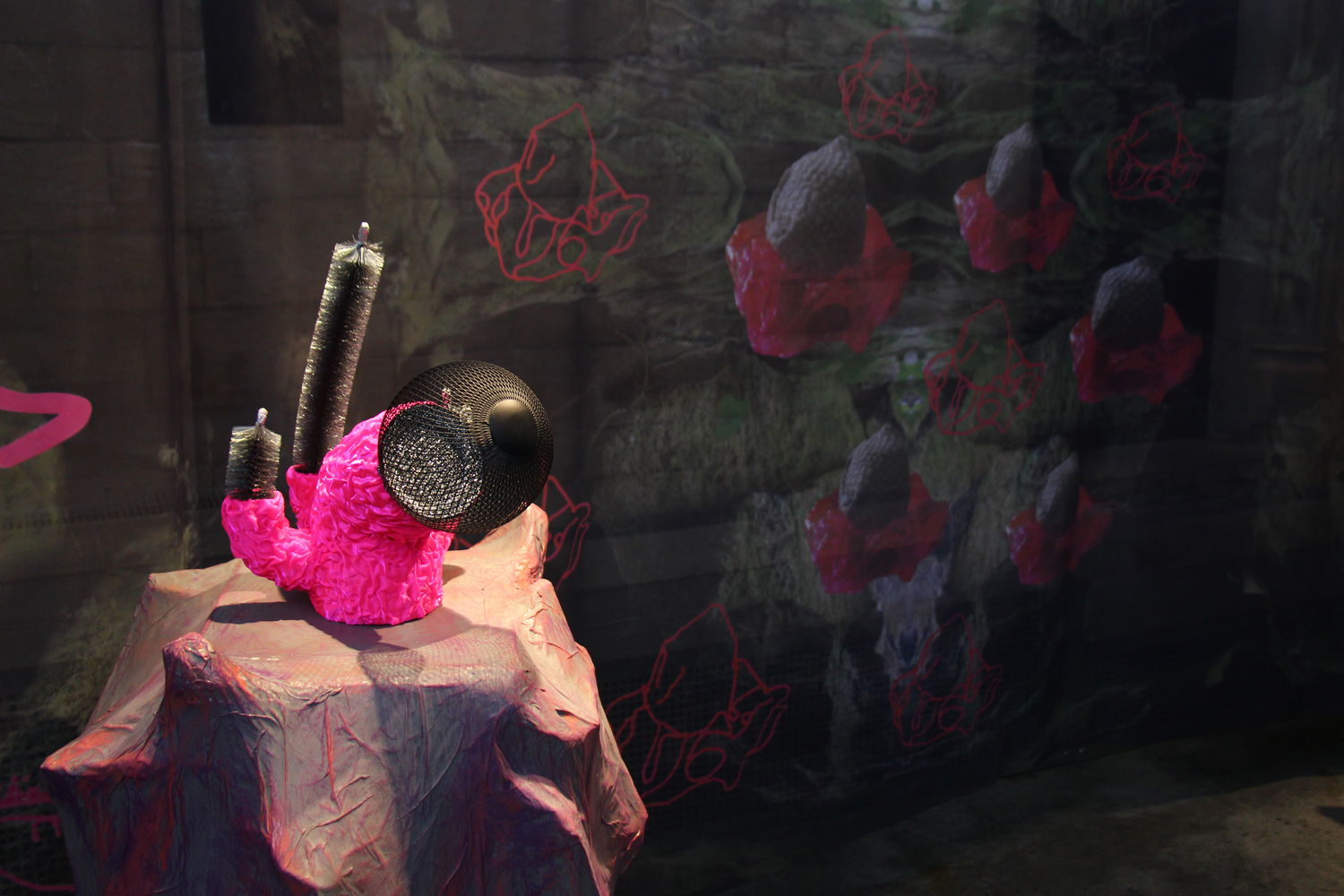 On the face of it, it’s curious that an exhibition titled Deep Space Moolog should have its genesis in a location that’s very much on Earth. Creswell Crags is though an extraordinary place; a series of caves within the limestone geology found along the Derbyshire and Nottinghamshire border, it was an important site during the last Ice Age, whose human occupants left behind a rich repository of stone, bone and ivory tools, and an exquisite variety of deer, bird, bison and horse figures inscribed into the rock walls. The present day custodians now neatly describe it as being ‘Britain’s oldest art gallery’. What is today a relatively unknown backwater was once a significant location linked to cultures and sites across Europe: encountering its artefacts and history enables a direct connection to those far away places and to that very different geological period when now extinct mammoths and woolly rhinoceros populated the region.

Kirsty E. Smith’s recent artistic exploration of this place allows a related kind of time travel and an imagining of different worlds. By going into this ancient site, into the dark interior of planet Earth, she finds herself close up against its stony surfaces, slick with damp and encrusted with the growth of moss and algae. Whilst examining the rock face and its fissures, alongside a recognition of the strange ancientness of this place she is also reminded of those rocky sets so beloved of television science fiction, which were intended to conjure an extra-terrestrial landscape in fictional outlying galaxies, where might dwell a menagerie of ‘alien’ species.

These days, blasé with the flashy fx of contemporary computer generated imagery, it’s easy to snigger at these earlier films’ limited technical means and their wonky polystyrene, papier-mâché constructions. How did those flimsy, wobbling rocks ever convince? How were we seduced by banks of pulsing lights and the useless knobs intended to evoke complex computer controls, or by the supposedly futuristic space costumes which now date the programmes so very precisely to the times in which they were made? And how did the ridiculous prostheses intended to transform human actors into weird and wonderful space creatures ever cause their affective frisson? That these basic approximations of alien planets, technology and life forms were indeed sufficient to trigger the imagination of countless adults and children glued to their TVs in previous decades is seized upon by Smith’s Deep Space Moolog project: she recognises our powerful human desire for creative transport and the delicious pleasures of playing ‘what if’ when invited to do so by the right scenario.

Smith ramps up the pure kitsch of this retro SF via her aesthetics of fluorescent sheen, glitter and gloss. She builds on speculative fiction’s willingness to dream up hybrid matter that might not be entirely animal, vegetable or mineral to produce a collection of sculptural ‘beings’ whose status is definitively uncertain.  Her fleshy, padded critters with their googly eyes, peculiar sprouting growths or armoured carapace of shiny plastic seem friendly enough as they are an appropriate size to be considered pet-like, but at the same time they unsettle since their vivid, clashing colours mimic the toxic visual threats of species familiar from Earth.

The sculptural ‘beings’ in Deep Space Moolog are fabulous creatures in all ways: not only do they exist as glamorous, beautifully crafted forms but they are also particularly fantastical. This very fabulousness brings to mind the etymological sense in which a fabula is a folk tale or fable. Smith has long been interested in the possibility of such matters, recalling how her father chose Aesop’s Fables as the material for her bedtime reading, supplemented by the retelling of incidents from his childhood. That he would also frequently digress, and allow stories to ramble or repeat, or that they would end in sleep and a drift towards dreaming, no doubt led her to the understanding that narrative structures might be infinitely extended, and might thus avoid coming to any explicit conclusion in order to sustain wonder and what would have been a momentary pleasure.

In Deep Space Moolog these varied elements are brought into creative and critical proximity to tell a tale whose interpretative possibilities multiply as we spend time within the exuberant theatrics of the installation. Alongside the archaeological perspectives and the flights of fantastic fiction, a film animates the now diagrammatic forms of Smith’s curious ‘beings’ and relays scientific and philosophical insights through carefully selected voiceovers. By getting deliberately cosmic she provokes us to consider our place in the universe and all that remains unknown and unfathomable in its immensely distant past and apparently unimaginable future. Smith’s work here is a sort of serious play which shows how even the daft sets of Star Trek might create a way of approaching such absolute otherness; amidst the day-to-day demands of life and the relentless chatter of inconsequential things she seems to show how important it is to take time for the limitless feelings of oceanic fantasy and reverie which connect us to the intergalactic span of time and space.

That Cresswell Crags should have been so generative demonstrates how from before Plato through to Bachelard and beyond the cave has provided a recurrent and important human metaphor. It might variously be considered a place of safety and retreat, a conceptual womb or a manifestation of the unconscious, and perhaps a physical and psychological portal wherein hidden rituals make possible a shift into altered states and spaces. Deep Space Moolog translocates the cave’s effects into the contemporary gallery of 20-21 Visual Arts Centre (a venue that we should not forget was once also the sacred space of a Christian church) and sets them vibrating with those televisual ghosts in the machine remembered from past years, before amplifying the whole with a cast of creaturely characters whose giddy presence is intended to delight and discombobulate. It’s a heady cocktail, whose ludic philosophising first nudges adults to laugh, wonder and imagine as they once did so regularly in childhood, but then to engage with the resonance of such responses in conjuring those human attempts to decipher the esoteric universe in which we find ourselves.

Hear Kirsty talking about the exhibition.

Joanne is an an artist, writer, researcher and publisher with a curiosity about everyday life and the ordinary places in which she lives and works. Much of her activity emerges through a serial publication, the Pam Flett Press, which explores the visual, verbal, audio and temporal possibilities of the ‘essay’, and via the opportunities for production that arise in dialogue with creative and critical friends. Joanne is a Senior Lecturer in Graphic Design at Sheffield Hallam University.

Share This Post
Via Facebook, Twitter or Email
← The Start of Something: Waddington Cultural Collective launches its manifesto
Wayne Burrows interviews Larry Achiampong for a-n about his New Art Exchange exhibition ‘UNTITLED: art on the conditions of our time’ →