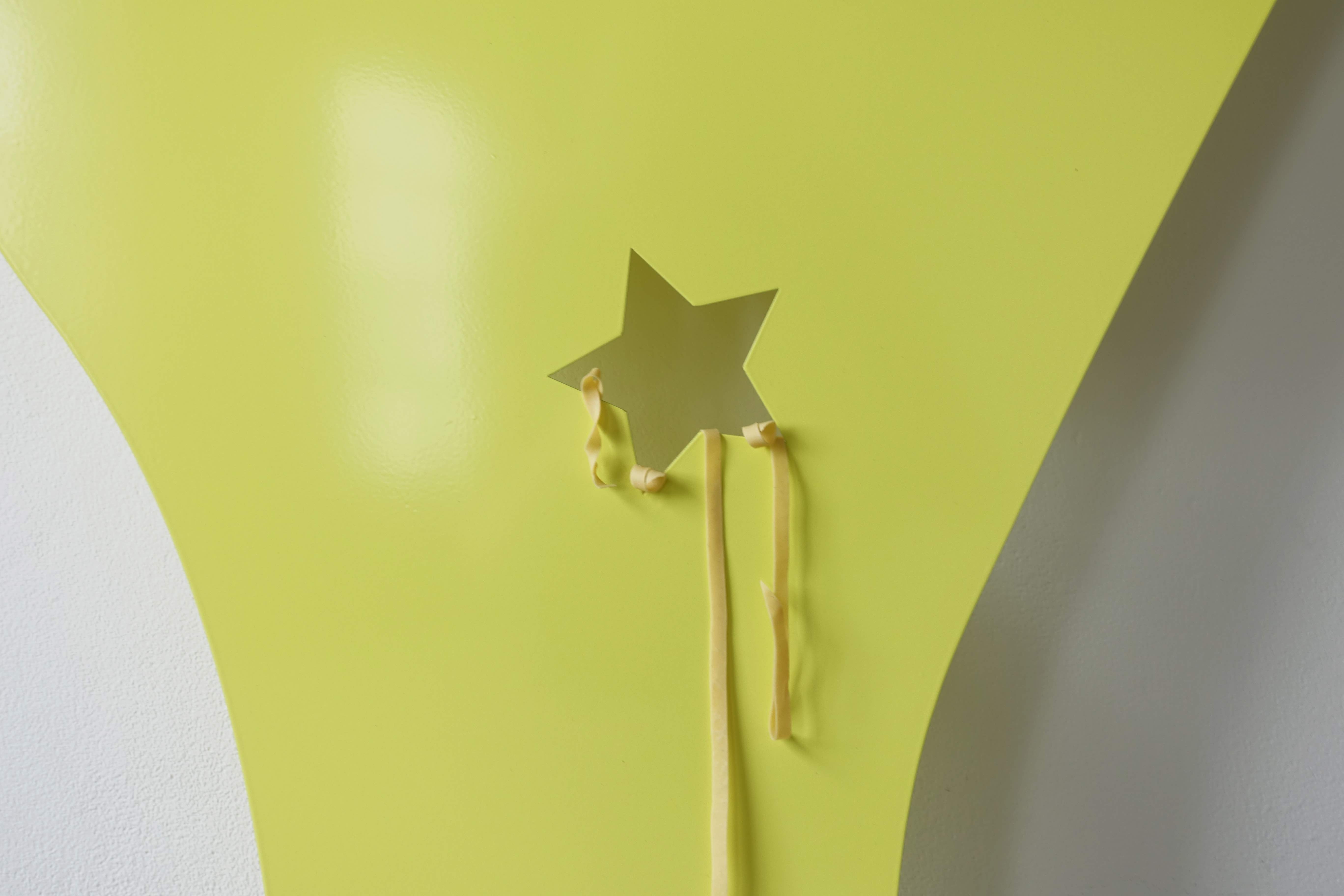 Colette Griffin is a studio holder at One Thoresby Street, Nottingham, Creative Producer (Curation) at Mansions of the Future, Lincoln, UK Young Artists Artist Ambassador and graduate of Loughborough University School of the Arts (2012). Her practice is the consequence of the crossover between studio based working, and domestic, often performative ritual, forming a merging of traditional sculptural language and shapes found within the artists daily routine. She has exhibited nationally and internationally at galleries and institutions including The Collection, Lincoln; Attenborough Arts Centre, Leicester; Modern Painters, New Decorators, Loughborough (solo); One Thoresby Street, Nottingham (solo); Sungshin Women’s University, Seoul and Jinji Lake Art Museum, Suzhou.

I am based in Nottingham and have been a studio holder at One Thoresby Street for around three years, but for two years before I moved to Nottingham I was between studios and was making work exclusively at home. I had a small stint at OTS in 2013 during a residency and was thrilled to get a more permanent space there, working alongside so many brilliant artists in a space that is of such importance to the art ecology of the region.

I am in fact fortunate to be ‘based’ in two very different cities in the East Midlands as I am also Creative Producer (Curation) at Mansions of the Future, a radical programme, bringing together artists and communities to create and share culture in Lincoln.

I joined Mansions of the Future in April 2018 after nearly four years at Nottingham City Museums and Galleries. The hope for the building and programme is that it will inspire a new model of creating shared culture within a city combining exemplary practice in socially engaged art with the development of an extraordinary partnership of city agencies and organisations.

My practice explores the crossover between studio based working, and domestic, often performative ritual, merging traditional sculptural language and shapes found within my daily routine. Ritualistic behaviours, and actions we carry out without thinking, are nonetheless performed and provide a continual, repeated means of exploring our surroundings, bringing attention to everyday methods of creating.

I often pair hand-made materials and physical making techniques with more industrial shapes and materials. I select the materials best suited to express my ideas at a particular time.

Within my moving image work I explore actions, processes and materials, cataloguing repeated outcomes, labours and failed attempts to ‘make’ or ‘perform’. I focus on the feel, shape and texture of the world, in some ways fitting into a more eastern canon of art history, representing the Japanese notion of ‘living artfully’.

I always loved creative homework tasks and have fond memories of making a plasticine replica of my garden with my dad and a cardboard model of a Roman home. When I was six a teacher told my parents that art was not my strongest discipline (although it was my favourite) and from then on, I had a point to prove.

Three of my A Levels were in art subjects and after college I completed a Foundation Diploma and BA Hons Fine Art at Loughborough University School of the Arts, graduating in 2012. During my foundation year I applied to a number of different universities and was adamant I wouldn’t stay at Loughborough, I even applied to a Fine Art Painting course, but shortly after decided that painting wasn’t for me (I am yet to return to it). Whilst studying I worked primarily in photography and later sculpture and now explore and combine techniques including lino printing, cyanotype making, laser cutting, latex fabricating, cooking, powder coating and moving image.

I was very active whilst at University and begun volunteering at Surface Gallery in Nottingham after exhibiting with them in 2011. I applied to a number of open exhibitions and opportunities in the region and in South Korea where I completed a 4-week sculpture symposium after graduating. I was awarded the Two Queens graduate residency prize in 2012 and the One Thoresby Street residency prize after exhibiting in the 2012 Nottingham Castle Open. It was important for me to maintain a practice straight out of university (I know people who didn’t and struggled to make work again) and residencies were a great way to continue working in a shared and vibrant environment. I learnt to make work in new ways, without the use of university facilities. I have had breaks, which are also important. For two years I practiced from home, so I started to explore more familiar materials, expanding my perception of the definition of ‘domestic’, which has many interpretations.

A lot of your work is sculptural and is resonant of the new generation sculpture of the 1950s and 60s, but your use of everyday items such as pasta subverts this. Is yours a playful practice or are you testing the idea of form?

For a long time, I have been interested in 1960s Anti-form sculpture and the principle that form should be derived from the qualities of the chosen material, this often included felt and lead; and for me pasta and latex. Regularly, I pair soft materials with more industrial forms. I enjoy testing and pairing materials and spent a long time exploring latex and similar fabrics. Hence my works often combine the forms and strategies of modernist art – squares, holes and repetition – with the materials and colours found in new generation sculpture.

My moving image work is playful and questioning. I see these explorations of domestic situations as performances, a record of a very natural activity or interaction with everyday materials and shapes. Although repeated each interaction varies, creating and capturing a different configuration with each frame.

Repetition features in your work and you explore a notion of attempt and failure. Tell us what it is about this process that appeals to you.

I’m a very logical person, well organised, I like routine. These are characteristics that wouldn’t stereotypically be associated with an artist or a creative. By creating work in a way that explores and celebrates repetition I am able to make it overtly autobiographical or telling of my own strengths and failings. This appeals to me.

Joseph Beuys’ methods of thinking have been influential to my work. A quote from Beuys that better expresses these ideas is – “even the act of peeling a potato can be an artistic act if it is consciously done” (Artforum, November 1969). I welcome the notion that we are sculpting the world through everyday activities and actions. Sometimes we succeed and sometimes we fail, but we must make many attempts to get to either of these two outcomes.

Tell us about the notion of ‘living artfully’ and how your work speaks to this notion.

Eastern views of art history have informed my work over the last few years. Zen Buddhism places great emphasis on practical tasks such as tidying the garden and cooking. If you are just taught things you are only acquiring knowledge, but by putting them into practice you can realise these lessons. The notion values inquiry, questioning, dialogue, process, reflection, expression and artful play, much like my work.

A few weeks ago, I spent 2 hours at Tate Modern, watching The Clock by Christian Marclay. I could have watched it for a lot longer. I missed the opportunity to see The Clock when it was shown at New Art Exchange, Nottingham, during British Art Show 7, so was delighted to finally do so.

The 24-hours long installation is a montage of thousands of film and television clips which contain clocks or references to time, edited together so that they show the actual time. The work also functions as a journey through cinematic history as well as a functioning timepiece.

The Clock highlights a pattern of behaviour in how we spend our time. Unconsciously many of us do the same things at particular moments in the day. Hence, I could draw a number of parallels with my own practice (such as ritual and reputation, as discussed above). I also admire the painstaking rigour and research creating a work of this type demands. Although I was watching the clock throughout, it felt as though I had only been sat watching the piece for minutes, not hours and as a fan of cinema I also enjoyed the trivia of recognising or guessing the film, the actor, or director.

Karla Black’s exhibition for Scotland in the 54th International Art Exhibition at the Venice Biennale had a big effect on my use of materials. The materials she uses are common, inexpensive, and fragile. I admire the fact that the work is accessible, as is its making.

Hot Touch by Eva Rothschild was equally inspiring, I wrote about what was the inaugural exhibition at the Hepworth Wakefield in my dissertation. I was questioning the values of touch vs. sight and the notion and application of haptic visuality. Rothschild’s sculptures are made from a range of materials including fabric, leather and wood, bringing together the hand-made and the industrially produced (much like my own). This exploration of the power and meaning of objects produces an extraordinary encounter between the minimal and the intricate.

I have seen a lot Emma Hart’s work, first at the Folkestone Triennial in 2014 and most recently at Whitechapel Gallery. Her exhibition Mamma Mia! is the culmination of an investigation into pattern, from visual patterns to patterns of psychological behaviour. I admire the raw honesty of her work, I think this quote by Hart (from a-n) best expresses my reasons for doing so – “The domestic is often romanticised but it’s also hell on earth sometimes; the domestic is where we go through every single emotion quite regularly. It’s a very dramatic place, you can go from anger to love without leaving the house.”

I am thrilled to be participating in the UKYA City Takeover: Nottingham 2019 in February, uniting over 250 artists based in the UK, China, South Korea, Europe and the Mediterranean. I will be showing Past her, a sculpture combining pasta and powder-coated steel at Surface Gallery from 7 – 13 February. There is lots going on throughout the festival, at a number of brilliant venues so please do check out the UKYA website for details. My work is also featured on my website.

Colette was interviewed in January 2019.