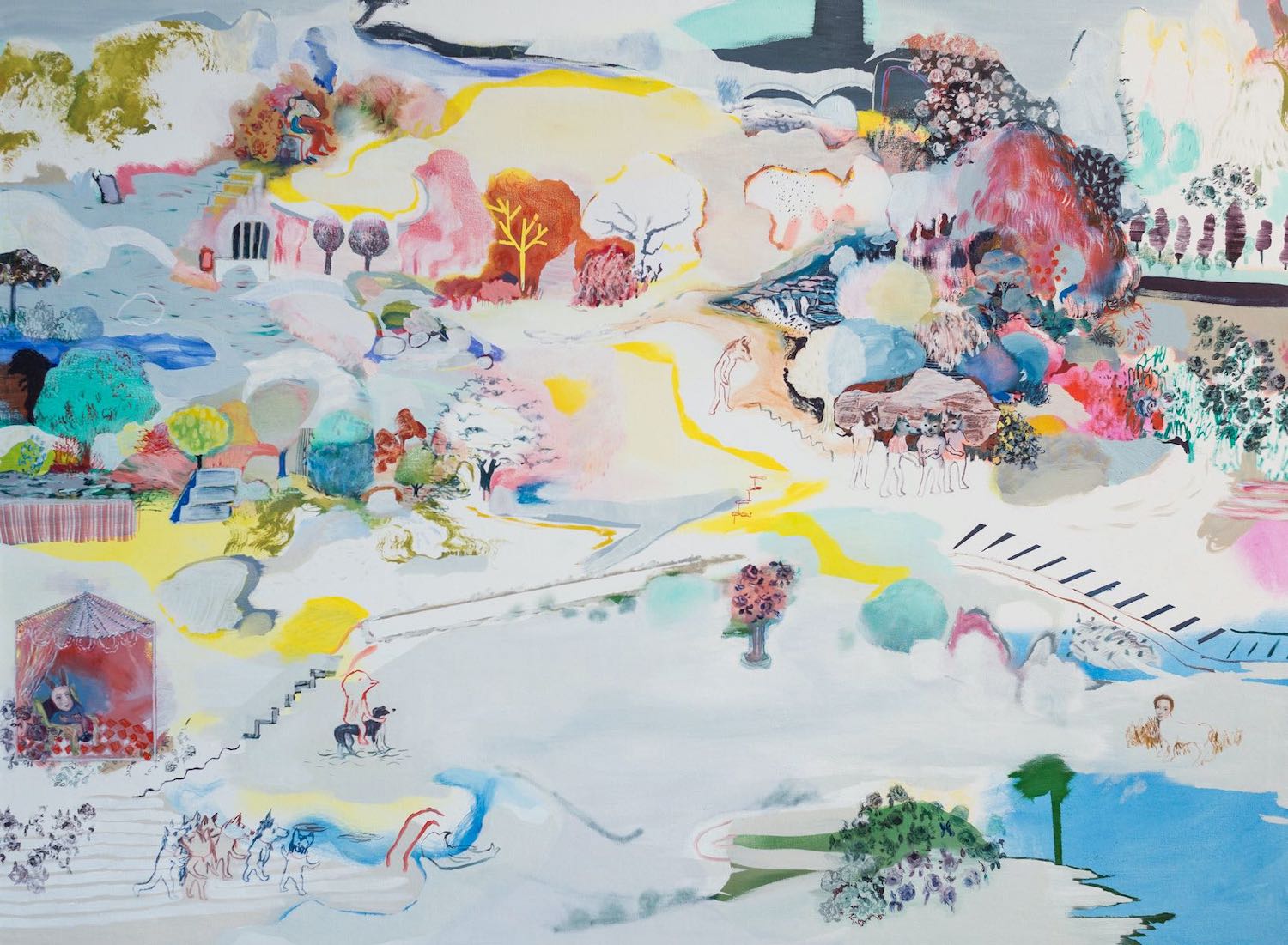 Jackie Berridge studied at Nottingham Trent University 1992-95 and the Anglian Ruskin University 2004-07. She has been awarded a number of prizes including the Dragon Prize at the Anglian Ruskin University 2007 and was winner of SKETCH2013 at The Rabley Drawing Centre, Marlborough in 2013 with a prize of a solo ‘Lost’ (2017). Selected solo shows include ‘Living Rooms’ Angelus Gallery, Winchester College, 2019, ‘Perfume and Savages’, the Angear Gallery, Lakeside Arts Centre, Nottingham (2014) and ‘Unnatural Selection’ at Derby Museum & Art Gallery, 2002. Group shows include group exhibition of Indian and UK artists, Reliance Arts Centre, Baroda, India,(2019), Back to Basics:Painting, Enia Gallery, Athens (2018), Mix:Winter – Lawrence Alkin Gallery (now Rhodes), 2016, The Darkness of Light, Heyri KeumSan Gallery Seoul, S Korea 2012, ‘Through A Glass Lightly’, GoCArt Gallery, Visby, Sweden 2011, Art on Armitage, Chicago USA 2011 and The Royal Academy Summer Show 2010, 2016, 2017. Selected residencies – Winchester College and further afield in Baroda, Gujarat, India in 2019. She set up and managed Harrington Mills Studios and Exhibition Space between 2007 and 2018, organising international exchanges and exhibitions at international artist-led art fairs in Europe.

I work from a home studio in Southwell, Nottinghamshire.

I paint and draw people in domestic settings – representing a world of interior and exterior; a place to dream, a sanctuary or alternatively a place of captivity and imprisonment. Whilst occupants live cheek by jowl, they also remain solitary and independent of each other. Colour, pattern and visual clues provide insights into character whilst the expression of individuals remains passive – allowing for personal interpretation.

Influences are wide and varied and include animations for children (‘Mr Benn’, the ‘Clangers’, and ‘Magic Roundabout’), medieval altarpieces, Alan Bennett’s ‘Talking Heads’, the ‘Starship Enterprise’ and Indian Miniatures. The ‘Starship’ allows freedom to explore different boundaries and creates a visual bubble of infinite space. Whilst characters from stop-frame animation are a reminder of how the viewer can project expression onto impassive heads.

How long have you been practising and by what route did you come to your practice?
I graduated from NTU in 1995 with a degree in Fine Art, specialising in abstract painting. (I was a mature student with three children). After university I moved into Wollaton Street Studios, Nottingham and exhibited regularly in local and national shows. In 2002 I had solo shows at Derby Museum, the Royal College of Pathologists, London and the Yard Museum, Wollaton Hall, Nottingham. A year later I was in France setting up and hosting painting holidays and marketing a gite and B & B to holiday makers. There was no time to paint! In 2004 we returned to UK and lived in Chelmsford where I embarked on an MA in Children’s Book Illustration at the Anglian Ruskin. As there were no studios in the town it meant I could work at the kitchen table and develop new skills in storytelling and sequential image. Although I loved making picture books, I missed painting and decided to continue with my fine art practice but with a new emphasis on storytelling when we moved back to Nottinghamshire in 2007. It felt like starting from scratch and I was nervous about making work about anthropomorphic beings occupying fantastical landscapes – after leaving the city making abstract work inspired by the human anatomy. My first real outing of the new work was submitting paintings featuring hybrid birds and a Yorkshire Terrier in a frock to the Nottingham Castle Open. I was delighted when the two paintings were accepted and I felt more confident. Now, I worry less and I am quite happy inhabiting an imaginary world and making paintings for others to work out.

When we returned to Nottingham, I set up Harrington Mill Studios in Long Eaton. As well as 18 studios there was a space for exhibitions. It offered a great facility for local artists but we also hosted exhibitions of work from artists from Seoul, Chicago, Visby (Sweden) and Iceland. We finally closed the doors in December 2018 after a wonderful French exchange with artists from Honfleur. I now work from a home studio which has a major impact on my carbon footprint.

Your work features domestic settings, as well as theatrical, fantastical or eerie landscapes. Are these different bodies of work, driven by different motivations, or do they allude to surface and more covert behaviours?

The earlier anthropomorphic paintings/drawings feature groups of beings in social settings where I was interested in interactions, hierarchies and social isolation. The animal heads showed little expression and were almost mask like. Most of the communication was in the form of body language. The current work follows on with the nonverbal communication but expands to include interior décor and use of a personal iconography to express the exterior/interior worlds of different people.

The work is very layered allowing for different interpretations. I like to draw the viewer in with playful imagery and let them discover or question what lies beneath the surface.

Are you telling stories, with the people that feature in the work characters? It seems that the figures with human bodies topped with animal or bird heads could be archetypes of sorts, or is that a misreading, do they serve a different purpose?

Yes, the work is narrative…some of the scenarios are inspired by specific events but others are more generic or imagined. Whilst I don’t have particular archetypes in mind, these evolve as the work develops. This is especially true when I was creating the body of work “with human bodies topped with animal or bird heads” where the trickster and the heroes emerge.  Recent work is more focused on particular individuals, both real or fictitious. I have made smaller portraits where the essence of the individual is described rather than the physical likeness.

What makes one piece a sumptuously coloured painting, and another a black and white or coloured, albeit muted, drawing?

There is no hierarchy in my work between drawing and painting. I like the challenge of working in different mediums and in various formats/sizes. Mostly ideas are generated in a sketchbook where I will make observational studies and let the imagination flow but I do not refer to the sketchbook directly when I paint. I prefer to work from memory. The choice of what to create is not made until I am faced the blank sheet of paper or a primed canvas. As I work in a series, I often work on several pieces at a time.

I just want to make better paintings and drawings.

Last year was the busiest and most rewarding. 2019 kick-started with an amazing residency in India, working with Indian artists and exhibiting in Baroda. It was fully funded and organised by the amazing organisation Artcore, based in Derby and was one of the most joyful and rewarding 3 weeks. For the sixth year running I also organised an exhibition of work by HMS alumni at the artist-led event in Athens with friend and artist Alison Whitmore. In August, a drawing was selected for the Trinity Buoy Wharf Drawing Prize, currently on show in De Montfort University Gallery, Leicester. Two paintings were  also selected for ‘Exceptional’ at the Collyer Bristow Gallery, London curated by Rosalind Davis. To crown an amazing year, I was invited to do a 4-week residency at Winchester College where I was given a solo exhibition, a studio and digs. I worked with year 10 and year 12 boys sharing my practice giving them an insight into different methods of drawing and painting.

Sometimes unexpected events have meant there have been lean spells, sometimes for long periods.
Knowing when to stop and overworking a painting can be a problem.
I am not always good under pressure as my confidence dips as deadlines approach.

I was bowled over by the ‘Forgotten Masters: Indian Painting for the East India Company’ currently on show at the Wallace Collection until mid-April. I particularly loved the paintings of flora and fauna with their microscopic details –which were spectacular and conveyed personality as opposed to being a descriptive scientific study. As I have been looking at Indian miniatures for inspiration it was a joy to see so many masterpieces together.

I love the paintings of Iraqi-Iranian artist, Hayv Kahraman whose work I first came across at the V & A in 2018. I was drawn to the subtle way she tackles dark issues, traumatic memories and a nostalgia for what she has lost as a refugee fleeing the Gulf War with few possessions.  Her stunningly beautiful, haunting paintings are rooted in her personal story. Her influences include Persian miniatures and Renaissance paintings, something I connect with too.

I intend to work smaller and spend more time on each piece. During December 2019 I was fortunate to participate in a residency at Derby Quad with the Maktab artists from Lahore who still practice the traditional methods of miniature painting and drawing. The process was beautifully unhurried. From making the brushes, preparing the paper to sharpening the pencil I was given lessons first hand. I would like to combine elements of miniature painting with more gestural marks. Using less will reduce the amount of materials I use. I expect the output will be less. All good for the planet!

Probably Rose Wiley. I love her imagery, storytelling and humour.

I currently have a drawing at the DMU Gallery, Leicester in the Trinity Buoy Wharf Exhibition, finishing 18 April. In May I will be showing work at the Platforms artist-led art fair in Athens. I have organised a booth for 5 years with HMS but Alison Whitmore is leading it this time. The two of us are travelling by train for over a week, making work on the way – focusing on the theme of ‘Journey’. I will be drawing/painting on found material. .   We are looking forward to seeing old friends and meeting new ones. I am also taking works on paper for Enia Gallery in Athens who represent me. In June I have a deadline to design a playing card (Jack of Clubs) for the charity Transplant Links Community. The work can be any size as long as it fits the playing card format. It will be exhibited and auctioned off later this year alongside work by 51 other artists. Jake and Dino Chapman and Grayson Perry contributed last time. The images will be printed onto a deck of cards and sold online. They make lovely presents. This will be the fourth time I have supported the charity. Closer to home I will be opening my home studio during Southwell Open Studios during the last weekend of October.

Jackie was interviewed in March 2020.

All the images are by and courtesy of the artist.