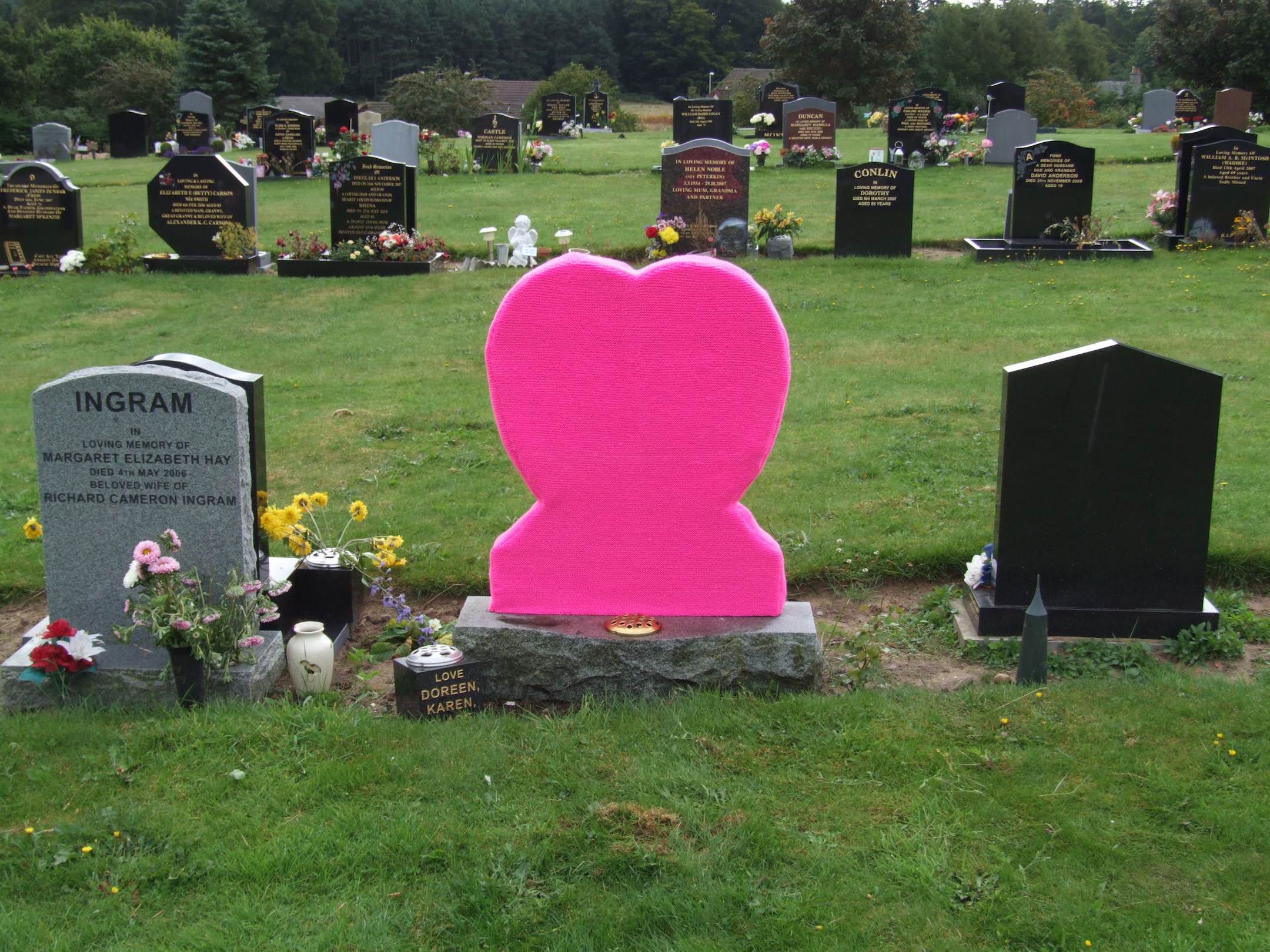 Karen Logan is an artist and creative practitioner based in Derbyshire, her practice combines a range of media and techniques encompassing drawing, stitch, knit and sculpture. Recent projects include an aa2a placement at The University of Derby and participation in the Summer Lodge 2019 Residency at Nottingham Trent University. Karen gained an MA in Textiles with Distinction from Goldsmiths, University of London and was the recipient of a AHRC award.

Where are you based

I live in Matlock and have a studio at Haarlem Artspace in Wirksworth, Derbyshire. It’s the best studio I’ve ever been part of, inspirational folk and a kind and supportive ethic.

I make objects and 2D work using a variety of methods and craft skills. I may site my work outdoors, in cemeteries and forests, on footpaths as well as gallery spaces.

I’m interested in emotional charges and hidden meanings in the everyday and seemingly unremarkable. Ideas around keepsakes, mementos, how we belong and what we belong to. There is a ritualist aspect to the attention I devote to the misplaced and overlooked, and an invitation for audiences to honour overlooked tales that may be their own. I’m careful in how I construct images, wishing to allure and disarm. The spaces I create are carefully considered and presented in a way to elicit particular reactions from viewers and participants.

I began working as an artist around 1995. A BTEC National Diploma in General Art and Design led to a BA Hons in Printed Textiles at Derby University. There was a gap of nine years between my BA and MA and during this period I exhibited, had minimum wage part-time jobs, taught in collages and ran workshops for different organisations – always just about surviving.

Decided I’d do an MA, and if I was going to get into debt I’d go to the best place I could – Goldsmiths. At the time they had a course that was basically fine art with an incredibly open connection with textiles, it was perfect. I moved to London from Nottingham, with the intent that if I didn’t get in that year I’d apply the next. I got in, received an AHRC award, discovered I was dyslexic and for the first time in education received support with my learning, graduating in 2003. I have such fond memories of that year, the tutors, year group, challenges and seismic shifts in practice and how I thought about myself as an artist and creative practitioner.

After Goldsmiths I worked as a creative practitioner in schools, galleries and community settings in London and beyond. Many times my art practice has simply been writing ideas in a note book, not having the time, money or space to focus on my work. Knitting became a process I used partly as a response to not having a work space, I could fold it up and work on public transport!

I moved from London to Derbyshire in 2018 for more affordable space and access to landscape and I am in the process of settling and finding my feet. The move meant I could take on a studio and I’m currently reflecting on past and present work and wondering about next steps.

Tell us more about how you use material and process to produce work about recollection and memory.

I use particular materials that are familiar and evocative, such as handkerchiefs, blankets, pillowcases to construct my work, some from childhood, others found in charity shops. I use acrylic yarn, thread, buttons – items available to me as a girl child of the 1970s using the hand stitching and knitting skills learned as a child. Devalued, overlooked material that I, through my process, invest with supreme value.

These materials are rich with association and familiarity and I wish to gently disrupt these associations, using yarn to make a gravestone cosy, a tablecloth to make a mask, an umbilical type cord using French knitting…

Last year I began to paint intricate, life size watercolour paintings of flowers and leaves found in the pages of second hand books and flower presses. I’ve given this project the working title Found Flora and intend to build on this collection throughout the coming year. These small gestures contain stories, who picked and saved this leaf, this four leafed clover? What did this memento represent? In what household? By whose hand?

People, land and place are important touchstones in your work. Do they inspire specific works or do they reveal themselves through your work?

I’m interested in notions around belonging, to others, to the land and the disconnect many experience. In my Close Knit project I’ve gathered and claimed my family, knitting covers for their headstones. By doing this I’ve stood in places my ancestors would have, by the grave of a family member – many of whom I never met. This project has taken a decade, I took the final photograph last week.

My father was from Scotland and looking back I can see he was out of place in the Essex/ London border where we lived. Once he planted heather gathered on a trip back home, it wouldn’t take in the London clay and died. This memory sums up much of my relationship with him. We lived in a council house and I was aware at an early age of a sense of fragility, of the house not belonging to us, so its no surprise I’m concerned with place and belonging.

What does involving an audience bring to your work?

Once the work is out there it is open for interpretation and I’ve experienced light bulb moments where viewers have named something in the work that I’d not been conscious of but recognised immediately. I’m also fascinated when someone has a response or makes a connection I’d not considered.

My practice is something I think about everyday. I’m constantly mulling over ideas, writing, making notes. I’m motivated and quite stubborn. I set myself projects with deadlines and goals. What I’m doing feels important, necessary and there is a joy in my bones when I make something that reflects my inner world back to me.

The biggest achievement is that I’m an artist 27 years since graduating from my BA. Its been such a challenge.

I worked in schools for many years and particular pupils stay in my mind, I still wonder about them, hoping they discovered their particular ability/gift. I felt the responsibility of going into a classroom with the opportunity to present art in a way that the pupils felt it belonged to them. I wanted them to own it, claim it as their right if they wished. That galleries were for them, their opinions and interpretations mattered. Their progress and bravery delighted me. I had no clue about this until I’d left school, I wanted to give them a head start.

A familiar one for artists – low income, instability of income and housing, cost of making work, finding a balanced between paid work and practice.

My bones felt so at home in Waking The Witch: Old Ways, New Rites at the Bonington Gallery, Nottingham – an exhibition looking at the importance of craft, ritual and land to the practice of the ever-shifting figure of the witch. The space was beautifully arranged, light levels low, staging of artworks and artefacts pleasing. It was a space in which to dwell and allow the magic within the gallery to seep into you! It felt an affirmative space. I particularly enjoyed the corn dollies, part of the installation Home Rites by Cathy Ward, the film Dream Family by Nadine Byrne and tools and artefacts from the Museum of Witchcraft and Magic selected by Blue Firth. The text accompanying the show – Magic Kills Industry by Georgia Horgan, was eye opening and generous.

Many many! To name a few, Louise Bourgeois, particularly her sculptural work with textiles and how this connects to her childhood. She said something along the lines of mending is like asking for forgiveness, I adore that idea. Annette Messanger, Le Repos des Pensionnaires, bird forms in tiny hand knits, pointlessness, futile, caring, odd. Way back in 2005 Jeremy Deller and Alan Kane’s Folk Archive blew my mind with its focus on creative practices and artefacts from outside the traditional art world, I constantly return to the publication from that show. George Shaw’s vivid paintings of housing estates and suburbia are incredible, I love that he uses the Humbrol aircraft modelling paints of his childhood. David Shrigley’s disquieting drawing and sculpture amuse me, a favourite is Gravestone, which has a shopping list of bread, milk, cornflakes etc carved into a gravestone in gold lettering.

I’ve never been one for looking too far ahead, though in recent years I have worked at becoming more strategic. I’ve just set up my studio space and have many ideas, so I am beginning a process of reviewing existing work and using that as a spring board into new making. I’d love to take part in more residencies and show my work much more, possibly beyond the UK. In terms of my work as a creative practitioner I’m most motivated when working with audiences that are new to art, or may not think it’s for them, facilitating sessions directly within gallery and museum exhibitions and displays – I’d like to do more of that.

If I could bring geographer Doreen Massey from beyond the veil it would be enjoyable to talk about place and space with her, she described space as like a pincushion of a million stories.

Making spaces is something thats important to me, but much of the time it’s subconscious, or I take it for granted. When others tell me they feel calm, safe within my space, or state that your space is your work, or call it a lair I reflect upon how key crafting a carefully considered environment is for me.

My work can be seen on my website, where you can also find a list of any upcoming exhibitions.

As mentioned, I’ve just finished a decade long project Close Knit: A body of work and I am excited about exploring ways in which I could share this.

Karen was interviewed in January 2020.